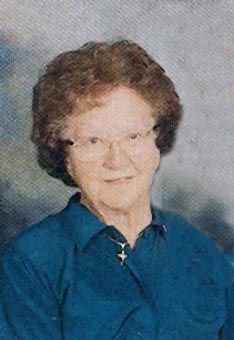 Visitation will be one hour prior to the funeral at the church.

Interment will be at , rural .

She was preceded in death by: Her parents: John and Lena Stoltenow; her husband: Ralph Keenan; her son: Wayne Keenan; Her great-grandson: Chris Schumacher; Her 6 brothers: Gilbert, Herb, Reinhold, Elmer, Theodore and Ernst Stoltenow; Her 3 sisters: Viola Klawitter, Clara Hoyem and Doris Gutzmer

Emilie was born August 18, 1914 at , to John and (Gehler) Stoltenow. She married Ralph Keenan on June 12, 1935. The couple farmed outside of where they raised their son, Wayne. They retired and moved into Wyndmere in 1978. Ralph preceded her in death on October 2, 2000. Emilie continued living in Wyndmere until moving to Dakota Estates in , and in March, 2005 became a resident at Oakes Manor in .

Emilie was a lifetime member of in . She enjoyed living on the farm and working with Ralph, caring for her chickens and loved selling eggs. She also loved being a member of the Peace Lutheran Church LWML, doing sewing and quilting for the missions and visiting with family and friends.

Arrangements are being handled by Joseph Vertin & Sons Funeral Home, .

To order memorial trees or send flowers to the family in memory of Emilie Keenan, please visit our flower store.