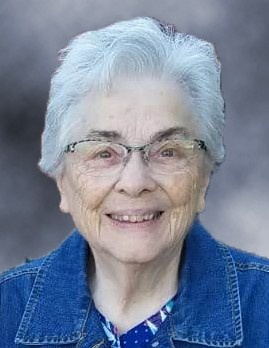 Emily was born in Waseca, MN, on March 10, 1927, to Oscar and Mabel (Bamford) Eaton. She grew up on the family farm near Waseca, and in 1945 graduated from Waseca High School. Emily went on to obtain a bachelor’s degree in religious education with a minor in English at Asbury College, Wilmore, KY, graduating in 1949.

On August 25, 1949, Emily was united in marriage to Paul Speakman in Waseca. The couple made their home at Wilmore, KY, for three years, and then Beaver Creek, MN, where Paul began his first job in the education field. They later moved to Jeffers, MN, for five years before making their home in Breckenridge in 1958. Emily and Paul celebrated 69 years of marriage shortly before Paul passed away on October 22, 2018.

Emily lived a life of prodigious service and creativity, touching the lives of all around her. She enjoyed working on sewing projects for others, taught religious education at Circle of Nations School, Wahpeton, spoke at many Christian Women’s Club meetings throughout Minnesota and North Dakota, and was also a prolific writer. Study of the Bible marked Emily’s life, as she studied and meditated on it day and night. The fruit of her devotion to God and study of His Word was evident in numerous Bible study groups she led and hosted, especially those on the book of Romans which held a special place in her heart. Aside from teaching Bible studies, adult and children’s Sunday School, she also served in various capacities at Valley Christian Church for over 50 years. In her spare time, Emily enjoyed quilting, oil painting, and making numerous missionary trips to Mexico to be with her daughter, son-in-law and grandchildren. Yet through it all, Emily’s greatest passion was knowing Jesus as her Savior and living a life of daily fellowship with God. Her life has left a deep impact on many, both in the US and in Mexico, and her family will treasure the memories and time they were privileged to share her journey, while longing for the day they will be reunited with her in heaven.

The family requests memorials be made to Valley Christian Church, Breckenridge. These memorials will be used to fund service projects in Mexico in honor of Emily Speakman.

To order memorial trees or send flowers to the family in memory of Emily Speakman, please visit our flower store.
Open