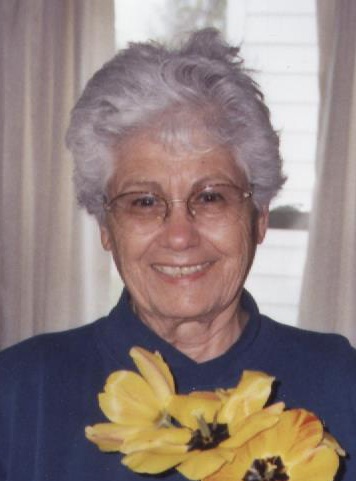 Estella Aldrich, age 91, of Breckenridge, MN, passed away on Saturday, April 25, 2015 at St. Francis Healthcare Campus in Breckenridge. The visitation will be from 5:00 to 8:00PM, with a prayer service at 5:30, on Wednesday, April 29, at Joseph Vertin & Sons Funeral Home in Breckenridge. The funeral will be at 10:30AM, Thursday, April 30, in the chapel at Joseph Vertin & Sons. Father Joseph Backowski will be the celebrant. The interment will be at Fort Snelling National Cemetery in Minneapolis, MN, at a later date.
Estella 'Stella' Atuna was born in Valedon, New Mexico, on May 2, 1923, the daughter of Ceferino and Maria (Lopez) Altuna. She grew up with 11 siblings in Lordsburg, New Mexico. Her first job was working in her hometown dry goods store. During WWII, Stella moved to California and worked for a manufacturing company which built ships for the US Navy. The women employed here were fondly referred to as "Rosie the Riveters". She moved back to Lordsburg when all of her brothers were called to join the war effort, and her father needed her help with the family business.
Stella met Leslie Aldrich, her eventual husband, while he was stationed in New Mexico at a POW Camp for captured German officers. They were united in marriage on February 24, 1945 in Deming, New Mexico, and then moved to Breckenridge, MN, where they established their home. They were blessed with five boys which led to the main reason Stella loved to cook, bake, and sew. An especially welcoming crowd- pleaser was the homemade eggnog she served for their New Year's celebrations. Stella was employed as an interpreter for the Summer Migrant Program in Breckenridge from its inception until 1995. She also worked at St. Francis Nursing Home in Breckenridge, and for a short time, at Minn-Dak Sugar Beet Plant in Wahpeton, ND.
Stella is survived by her husband of 70 years, Leslie Aldrich, Sr. of Fergus Falls, MN; her children, Leslie Jr. (Julia) Aldrich of Courtland, MN, Thomas (Lois) Aldrich of Fargo, ND, Rodney (Terri) Aldrich of Minot, ND, and Gregory Aldrich of Breckenridge; her 8 grandchildren, Natasha Goblirsch (Derek), Ryan Aldrich, Cora Kratky (Brennen), Krista Aldrich, Ester Aldrich, Nathanael Aldrich, Alex Aldrich, and Jon Aldrich; 4 great-grandchildren, Arya and Asher Goblirsch, Chloe and Camilla Kratky; her brother, Ceferino, Jr. (Angie) Altuna; her sisters, Cecelia Altuna, Mary Mora, Irene Anaya; and many nieces and nephews.
Stella was preceded in death by her parents, Ceferino, Sr. and Maria Altuna; her son, Guy Aldrich; her siblings, Olivia, Alfred 'Chico', Edward, Arthur, and Robert; and her half-sister, Andelina Diaz; and half-brothers, Elroy and Louie.
To order memorial trees or send flowers to the family in memory of Estella Aldrich, please visit our flower store.