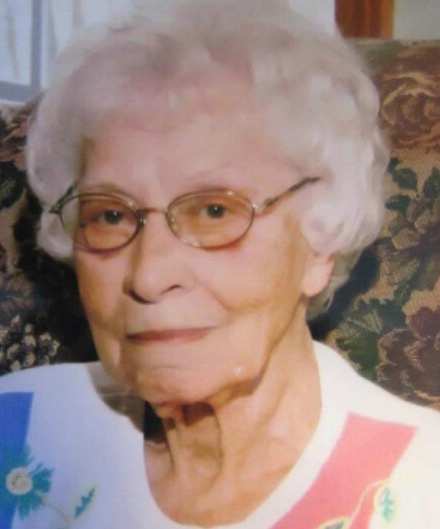 Esther Ann Berneking, 99, of Fargo, ND, formerly of Breckenridge, MN, passed away peacefully on July 30, 2015, at Elim Care in Fargo, ND. Funeral services will be at 2:00 PM on Thursday, August 6, 2015 at Breckenridge Lutheran Church in Breckenridge, MN. There will be a visitation at Joseph Vertin and Sons Funeral Home on Wednesday, August 5, 2015 from 5:00 to 8:00 PM, with a prayer service at 7:30 PM. There will also be visitation one hour prior to the service at the church on Thursday. Pastor Mark Manning is officiating. Burial will be at Riverside Cemetery in Breckenridge immediately following the service. Joseph Vertin and Sons Funeral Home in Breckenridge is assisting the family.

Esther was born on March 26, 1916 in Wheaton, MN, to Paul and Emilia (Raguse) Kassahn. She attended country school in Traverse County. As a young adult, she provided child care and did house cleaning for her neighbors, and also helped out on the family farm.

Esther was united in marriage to Eugean Berneking on October 24, 1940, near Wheaton, MN. They made their home and raised their 7 children on a farmstead in the Wheaton area. In 1965 they moved into Wheaton, and later moved to Breckenridge in 1967.

Eugean passed away on May 5, 1982. Esther worked at Wahpeton Health Care, Breckenridge School, and also Breckenridge Senior Center. She continued to live in her home on South 9th Street, until moving into assisted living a few years ago.

Esther was a wonderful cook and baker. She enjoyed outdoor activities such as fishing and gardening, and was a huge Minnesota Twins fan. She belonged to the Red Hats Society, was a member of Breckenridge Lutheran Church, and volunteered at the local Food Banks.

She was preceded in death by her parents Paul and Emilia; her husband Eugean; 4 sisters: Anna, Rose, Erna, Bertha; and 4 brothers: Otto, Herman, Walter, Arthur.
To order memorial trees or send flowers to the family in memory of Esther Berneking, please visit our flower store.