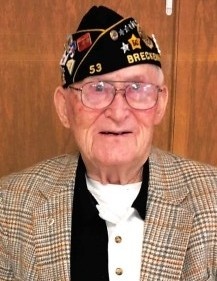 Eugene Alvis (Bud) Leinen was born on May 26, 1925, to Joseph Leinen and Dora (Larson) Leinen. The family farmed near Doran, MN and Bud attended school there. He later served in the United States Army from January 25, 1945, to December 9, 1946, in the 42nd Combat Engineers as a Staff Sargent and his time overseas was spent in Korea.

On November 27, 1947, Bud was united in marriage to Doris Mae Warner at the United Methodist Church in Breckenridge. The couple moved to a farm and started farming, and later, moved back to Breckenridge. From that point until his retirement in 1986, Bud worked on the railroad as a switchman, brakeman, and yardmaster.

Bud enjoyed summers at Ottertail Lake at his lovely lake home that he purchased in 1973. Some of his passions included fishing, hunting, bowling, and playing cards. He adored his two grandchildren and loved their time together.

Always one to be active in his community, Bud belonged to several organizations such as the VFW-Post 2766, American Legion Post 53, the Eagles, the Supreme Order of the Cooties Pup Tent 3, United Methodist Church for 74 years, and Railroad Veterans Association. Bud also took part in a very special organization of World War II Veterans, called the Last Man Standing Club. Among the men who had fought in Europe and the islands in the South Pacific, their agreement was the last man standing receives a bottle of Virginia Dare red wine. This year, Bud was honored with that bottle.

He was preceded in death by his parents, Joseph and Dora Leinen; brother, Russel Leinen; and sister, Delores Dohman.

To order memorial trees or send flowers to the family in memory of Eugene "Bud" Leinen, please visit our flower store.