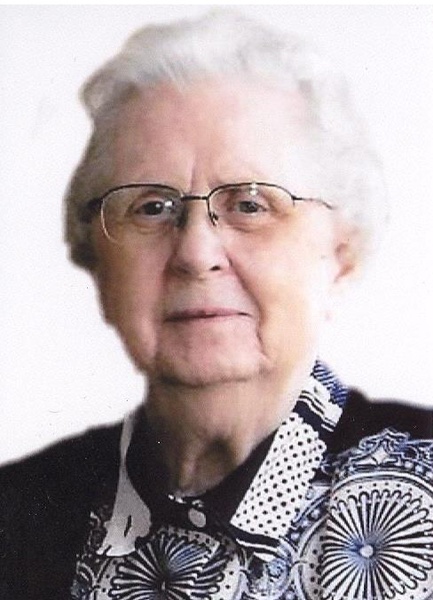 Evelyn Elizabeth Peterson, 86, of Detroit Lakes, MN, passed away on Tuesday, December 29, 2015, at Emmanuel Nursing Home in Detroit Lakes. The memorial service will be at Joseph Vertin & Sons Funeral Home in Breckenridge, MN, on Saturday, January 16, 2016, at 1:00 p.m., with Pastor Tom Olson officiating. The interment will be at Oak Grove Cemetery in Detroit Lakes at a later date.
Evelyn Ponstein was born to John and Catherine (Kwak) Ponstein, on April 24, 1929, in Lyon County, MN, on the family farm near Ghent. She attended country school for one year and then was bussed to Lynd Public School and graduated as salutatorian of her class in 1947. Following graduation, she was employed as a Dental Assistant in Marshall, MN. On October 8, 1948, Evelyn was united in marriage to her high school sweetheart, Ronald Clifford Peterson, in Balaton, MN, in the Balaton Church Parsonage. The couple made their home on a farm in Lyon County where they were blessed with three children, Douglas, Nancy, and John. After leaving the farm, Evelyn and Ron moved to Marshall then to Detroit Lakes where Evelyn obtained a Realtors license and was a Real Estate agent for the next 14 years. She retired in 1995 due to health reasons.
In her early years, Evelyn kept busy with flower and vegetable gardening, knitting and crocheting, bowling, playing cards, and oil painting. With the help of her kiln, she was able to transform clay into beautiful works of art for her family and friends. Evelyn also received hours of enjoyment from playing her Lowrey Organ. She looked forward to phone calls and visits from her family.
Evelyn is survived by her husband of 67 years, Ronald, of Detroit Lakes, her children, Douglas (Diane) Peterson of China Spring, TX, Nancy (Ray Vlaminck) Peterson of Tyler, MN and John (Kim) Peterson of Breckenridge; her six grandchildren, and nine great-grandchildren. She was preceded in death by her parents, John and Catherine and two brothers, Donald and Ernest (in infancy) Ponstein.
To order memorial trees or send flowers to the family in memory of Evelyn Peterson, please visit our flower store.