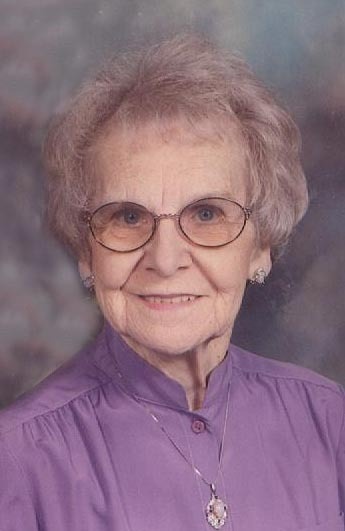 Evelyn A. (Giddings) Wefel, 92 of Sioux Falls, SD formerly of Breckenridge, MN died Monday July 29, 2013 at the Daugherty Hospice House in Sioux Falls. The funeral will be 1:30PM, Friday, August 2 at Breckenridge Lutheran Church. The visitation will be 6:30 to 8:30PM, Thursday, August 1, with a prayer service at 7:30PM at Joseph Vertin & Sons Funeral Home in Breckenridge. Pastor Mark Manning will be officiating. The interment will be at Riverside Cemetery in Breckenridge.
Evelyn was born March 20, 1921 to William and Anna (Meyer) Maahs in Champion Township, MN where she grew up and attended school. She was united in marriage to Harold Giddings on March 22, 1936 in Wilkin County, MN. They made their home in Breckenridge. To this union they were blessed with 4 children. Harold preceded her in death in 1978 at which time, Evelyn moved to Wahpeton, ND. In 1981, she was united in marriage to Edwin Wefel. Edwin preceded her in death in 1997. In 2005, she moved to Apple Tree Court in Breckenridge. Upon receiving a terminal diagnosis with brain cancer in January of 2013, Evelyn moved to the Daugherty Hospice House in Sioux Falls to be closer to her daughter.
Evelyn was an admirer of flowers, especially pansies and pink roses. She worked as a cashier at Wahpeton Drug, a hostess at the Hamburger Inn (Breckenridge) and spent 14 years as a sales clerk at the Breck Style Shop. In her spare time, enjoyed square dancing and clogging, crafting and crocheting. She was a member of the Breckenridge Lutheran Church and church circle. She was also a member of the Square Dance Club and a birthday club.
Evelyn is survived by her children, Bill (Nancy) Giddings of El Paso, TX, Dan (Judi) Giddings, Sr. of Holland, MI, Dale (C.C.) Giddings, Sr. of Pahrump, NV, and LeeAnn (Galde, Bieber) Russell of Sioux Falls, SD; 8 grandchildren and 14 great-grandchildren.
Evelyn is preceded in death by her parents William and Anna; her first husband Harold; second husband, Edwin; her grandson Daniel Giddings, Jr.; her great-grandson Christopher McGurk; five brothers, 3 sisters.
To order memorial trees or send flowers to the family in memory of Evelyn Wefel, please visit our flower store.