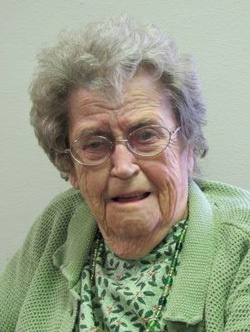 Fern Adelia Wilson, 92, of Wahpeton, ND, passed away on Monday, June 1, 2015, at St. Catherine's Living Center in Wahpeton. The funeral will be at 2:00PM, Wednesday, June 10, at Doran Presbyterian Church in Doran, MN. The visitation will be at the church one hour prior to the funeral. Pastor Wendell Kelm will be officiating.
Fern Lindquist was born on April 23, 1923, in Stromsburg, NE, one of six children born to Eric and Margaret (Bense) Lindquist. When she was just an infant, the family moved to Lincoln, NE, where she grew up and attended school. Following her graduation from Lincoln High School in 1940, Fern continued her education at the University of Nebraska with a major in Bookkeeping. Her first job out of college was with the National Defense Plant in Lincoln.
Fern's life changed forever on May 19, 1943, when she married the love of her life, Wallace Wilson, in a quiet ceremony in Lincoln, NE. The couple moved to Roswell, NM, where Wallace was stationed in the Army. While there, Fern was employed by the hospital which cared for the soldiers from Camp Roswell, a German POW camp. After Wallace was discharged from the military in 1945, the couple moved to a farm near Doran, where they raised their son, David. Over the years, she had the privilege of bookkeeping for some much respected employers, including Kent/Doran Grain in Doran, Don's Sportland in Breckenridge, MN, Three Rivers Decorating in Wahpeton, and Valley Fertilizer in Doran. She was active in the Doran Presbyterian Church where she lent her music talents as their choir director for over 25 years.
Wallace passed away in 1977 and shortly after, Fern relocated to Breckenridge. She continued to work until 1994, when she settled happily into her retirement from her vocation but not from her involvement with the civic clubs. She continued her commitment to the women's advocacy group, Zonta, and also in the Musical Arts Club. Fern loved to sing with the Combines Quartet, and also ministered to grieving families with her beautiful vocals at funerals.
Fern is survived by her son, David (Jane) Wilson of Breckenridge. She is preceded in death by her parents, Eric and Margaret; her husband, Wallace; her 2 brothers, Lyle and Lowell; her 3 sisters, Juanita, Helen, and Goldie.
To order memorial trees or send flowers to the family in memory of Fern Wilson, please visit our flower store.