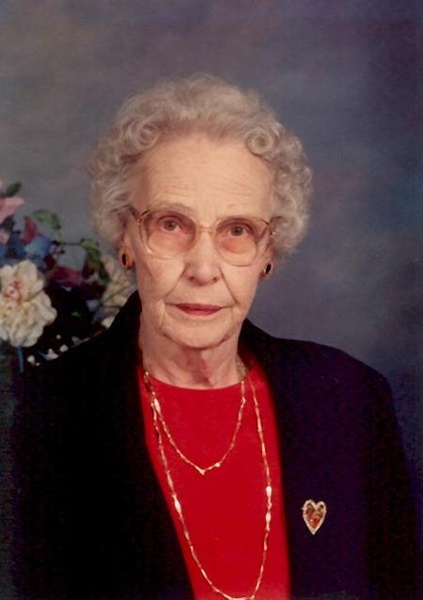 Florence Platt, 89 of Breckenridge, MN passed away at St. Francis Nursing Home on May 17, 2011. The visitation is Wednesday, May 18, 4 pm to 7 pm with a rosary at 5 and a prayer service at 7 at Joseph Vertin & Sons Funeral Home, Breckenridge, MN. There will also be visitation one hour prior to the funeral at the funeral home. The funeral is Thursday, May 19, 2011 at 1:00 pm at St. Mary's Catholic Church, Breckenridge, MN. Officiating is Father Kenneth Popp. The interment is at St. Mary's Cemetery, Breckenridge, MN
Florence was born October 14, 1921 in Breckenridge, MN, the daughter of Andrew and Agnes (Nordick) Abel of Kent, MN. She grew up on the family farm and attended Country School District #17 near Kent. She moved to Breckenridge in 1944 and has been a Breckenridge resident since.
On October 14, 1948, Florence was united in marriage to Vincent Platt at St. Mary's Catholic Church in Breckenridge. She was a member of St. Mary's Parish Guild, Catholic Order of Foresters, and Christian Mother's. Florence worked at Sagness Variety Store in Breckenridge, and later in Housekeeping at St. Francis Hospital and Minn-Dak Farmer's Co-op in the beet room until her husband's illness required her to stay home and care for him. Vince died March 6, 1988. Florence moved to the York Manor in 1989 and then to St. Francis Nursing Home on June 27, 2008
Florence took pleasure in singing, crocheting, embroidery, and quilting. She looked forward to vacations at the lake and the joy of being with family and friends. Florence was happiest when she was helping others. She would gladly take residents to church or appointments and was always there to lend a hand to friends in time of need. Florence is survived by her 2 daughters Kathy Kirkwood and Betty (Jim) Bogenreif, both of Breckenridge, MN; her 7 grandchildren Paulette, Donald (Sheila), Richard (Nicki), Chad (Tracy), Tom Aubree), Mike (Nicky) and Kristy (John); her 18 great-grandchildren who called her GG; her brother Francis (Lois) Abel, Breckenridge, MN; her sister-in-law Louise Abel, Breckenridge, MN; many nieces, nephews and cousins.
Florence is preceded in death by her parents Andrew and Agnes Abel; her husband Vincent Platt; her daughter Mary Platt Rude; her brother Robert Abel.
To order memorial trees or send flowers to the family in memory of Florence Platt, please visit our flower store.