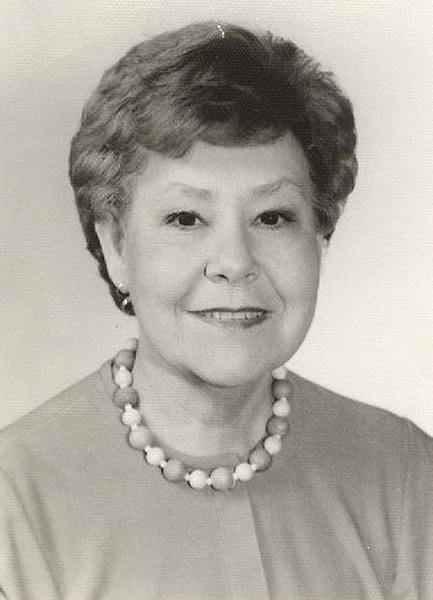 Florence Weiss, 88, of Breckenridge, MN, died Friday, December 20, 2013 at St. Francis Health Care Campus in Breckenridge, MN. The funeral will be 2:00PM, Monday, December 23, at St. Francis Health Care Campus Chapel, with a visitation one hour prior to the funeral from 1:00 to 2:00 PM. Father Joe Backowski will be the celebrant. The interment will be at Brushvale Cemetery at a later date.
Florence "Flo" P. Weiss was born October 18, 1925, the daughter of John and Laura (Buth) Pechlat, on a farm near Abercrombie, ND. She grew up and attended country school, Abercrombie High School, and Breckenridge High School. She earned her BS Degree at Valley City State University where she graduated with Honors. She was also a member of the Kappa Delta Pi Honorary Society.
Flo was united in marriage to Marvin Weiss on October 4, 1948. The couple lived in Wahpeton, ND. To this union, two sons were born. Flo began her teaching career in Richland County. She then taught in Glenwood, MN; Whitefish, Montana; and Coeur d'Alene, ID.
In 1960, Flo moved with her sons to Seaside, OR, where she took post graduate classes at Portland State University. She taught in the Seaside School District and Astoria High School for the next 9 years. It was then that she traveled overseas and began a teaching whirlwind. She taught in Angola, West Africa; Oran, Algeria; Ahwaz, Iran; Talara, Peru; Santa Cruz, Bolivia; Fukuoka, Japan. Then, for the next five years, Flo was at the Seoul Foreign School in Korea, where she taught Art and directed their school plays. While in Seoul, she also taught English night classes at Yonsie University. Her last post overseas was at Marymount in Santa Marta, Colombia.
Flo made her way back to the United States. For a short time, she worked for Senior Life Magazine in Riverside, CA, but she was drawn back to Seaside, OR, for another teaching position. It was there that she finished a 46 year long career in teaching as an instructor of Art and Writing at Clatsop Community College, Astoria. While she travelled and taught all over the world, Flo continued her own art work. She worked in oils, watercolors, pastels, ink sketches, batiks, and Oriental Brush Painting. She illustrated a book of African sketches that she did while in Angola. She also loved to write; submitting articles for the Korea Times while in Seoul, and for Senior Life Magazine in CA. She authored and published a book called "The Camel Ate My Wig and Other Hair Raising Stories". This book is on display at the Library of Congress in Washington, DC. More recently, she had written and illustrated two children's books entitled, "What the Animals Say around the World" and "Little Bit is Big Enough". Other hobbies included gourmet cooking, reading, crocheting, Swedish weaving, and playing Mah Jong (a tile game from China).
In May of 1995, she moved to Breckenridge to be closer to her sisters. She taught Community Education Classes for the Breckenridge School District, was a member of St. Mary's Catholic Church, the Legion of Mary, and the Christian Mothers. She was past president of the VFW Auxiliary in Wahpeton, a den mother, and held various offices in Education Associations. Her greatest satisfaction was the hundreds of individuals she helped get started in their creative endeavors. Her greatest love was for her children and grandchildren.
Flo is survived by her son, Dennis (Diane) Weiss of Seaside, OR; her grandchildren, Eric Weiss of Warrenton, OR, Shaun (Mike) Haner, Brian Weiss, Tara Eskina, and Kelly Miller all of Seaside, OR; her 4 great-grandchildren, Matthew Haner, Addison and Kyle Eskina, and Lacey Miller; her sisters Louise Abel and Angie Miller both of Breckenridge, and Lucille Duke of Jackson, TN; and John (Ruby) Yuill, who she thought of as her son, of Astoria, OR.
Flo is preceded in death by her parents, John and Laura; her son Kevin (2006); and her sister Cecelia Johnson.
To order memorial trees or send flowers to the family in memory of Florence Weiss, please visit our flower store.