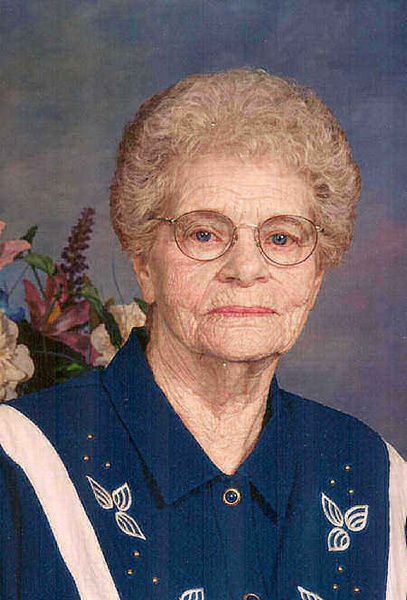 Frances M. Holecek, 95 of Anoka, MN formerly of Breckenridge, MN died on November 29, 2011 at the Anoka Care Center, Anoka. The funeral is Monday, December 5 at St. Mary's Catholic Church, Breckenridge at 11 am. The visitation is at the church one hour prior to the funeral. Father Kenneth Popp is officiating.
Frances was born on July 23, 1916 to Oscar and Selma (Olson) Nordling. She grew up and attended school in Wolverton, MN. After graduation, she continued to live and work on the family farm until meeting the man who changed her life forever. Steve Holecek and Frances were united in marriage on November 6, 1941 in Breckenridge. They began their life together farming in rural Breckenridge where they made their home and raised their two children. Steve passed away on September 13, 1963 but Frances continued to live on the farm until 1970 when she moved to Breckenridge. In 2003, she moved to Anoka to be closer to her daughter.
Spending time with her family at Potato Lake, near Park Rapids, MN was among her favorite things to do. She will be greatly missed by all those who knew and loved her.
Frances is survived by her daughter Jean (Edward) Prater of Ramsey, MN and her son Steve Holecek of Fargo, ND; her grandchildren James (Paige) Prater, Paula (Troy) Minske, Scott Prater and Michael Prater; and her 9 great-grandchildren.
Frances is preceded in death by her husband, Steve; her parents Oscar and Selma; her brother Selmer and seven sisters Alice, Ann, Esther, Nellie, Judith, Hazel and Edith.
To order memorial trees or send flowers to the family in memory of Frances Holecek, please visit our flower store.