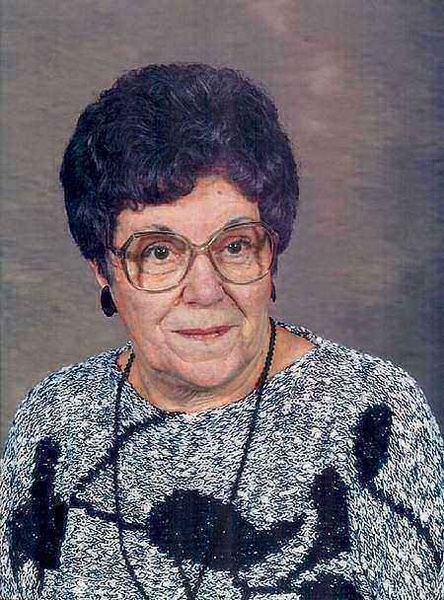 Frances Beatrice Olson, 93 of Breckenridge, MN passed away peacefully on December 10, 2010 at St. Francis Health Care Campus surrounded by her family. The visitation will be at Joseph Vertin & Sons Funeral Home in Breckenridge on Sunday, December12 from 5 to 7 pm. The funeral will be at Breckenridge Lutheran Church on December 13 at 11:00 am with Pastor Mark Manning officiating. Interment will be at Fairview Cemetery in Wahpeton, ND. Pallbearers are Chad Olson, Jodi Olson, Chantel Olson, Larry Larson, Bill Nelson, and Hugh Mikkelson.
Frances was born on December 12, 1916 to Fred and Hilda (Popp) Drier in Wahpeton, ND. She attended the Wahpeton schools, graduating high school in 1934. Frances was united in marriage to Barney Olson on December 31, 1947. They made their home in Breckenridge. Barney preceded her in death in 1957. Frances remained in her home where she raised the most beautiful flowers in town. Her flowers and her grandchildren were her pride and joy. Frances was a member of the American Legion Auxiliary and Breck Lutheran Church. She entered St. Francis Nursing Home in January of 2010. Frances would have been 94 on her next birthday-Sunday December 12.
Frances is survived by her son Jim (Sandy) Olson of Breckenridge, MN, her daughter-in-law Mary Silverthorne of Kempher, TX; her 4 grandchildren, Debbra (Steven) Fausnaugh, Cheryl (David) Perez, Chad (Jodi) Olson, and Chantel Olson (Larry Larson); her 6 great-grandchildren, 9 great-great grandchildren. Frances is preceded by her husband Barney, her son Wendell Richard Silverthorne, grandson Ricky Silverthorne and brother Dennis Drier, and her parents Fred and Hilda Drier.
To order memorial trees or send flowers to the family in memory of Frances Olson, please visit our flower store.