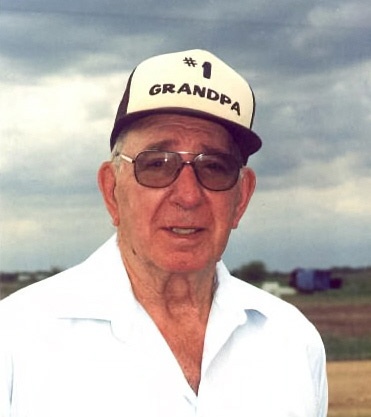 Francis “Frank” Tolbert, 86, r ural Breckenridge, MN, passed away on Friday, March 13, 2009 at his residence at rural Breckenridge, MN. Funeral services will be on Monday, March 16, 2009 at 10:30 AM at St. Mary’s Catholic Church, with Father Kenneth Popp officiating. Visitation will be on Sunday, March 15, 2009 from 4 PM to 7 PM with a prayer service at 7 PM at Joseph Vertin & Sons Funeral Home, . There will also be visitation one hour prior to the service at the funeral home. Interment will be at St. Mary’s , .

Francis “Frank” Tolbert was born on February 12, 1923 to Arthur and Elizabeth (Zitka) Tolbert in . He grew up on the farm in that he has lived on all his life. He attended school at District #60 country school and then attended and graduated in 1940. Before and after his military service he took short courses in tractor repair, welding, and machine shop at NDSCS during the winter. On January 24, 1945 he entered the US Army and served during World War II in the and where he saw after the atomic bomb was dropped, and was discharged in November of 1946.

Frank was united in marriage to Lois Voss at St. Gall’s Catholic Church in on September 20, 1958. The couple made their home and raised their family on the home farm. Lois preceded him in death on February 12, 1997.

Frank was a lifelong member of St. Mary’s Catholic Church, where he was active in the Catholic Order of Foresters. He was a member of the American Legion in Breckenridge, the WW II Last Mans Club, NRA, and the Breckenridge and Wahpeton Senior Citizens. He was proud to have his farm recognized as a Century Farm. Frank liked working in his shop, bird watching, playing whist and pinochle, hunting pheasants and deer with his sons, and going camping in and with his family. He also enjoyed attending the Breckenridge Class Reunions which he attended for several years. He especially cherished the time spent with his grandchildren at the farm.

He was preceded in death by his parents, Arthur and Elizabeth Tolbert; his wife, Lois Tolbert; his son in infancy, Michael; his brothers, William and David Tolbert; his sisters, Elizabeth Hansen and Anna Marie Tolbert in infancy.
To order memorial trees or send flowers to the family in memory of Francis Tolbert, please visit our flower store.