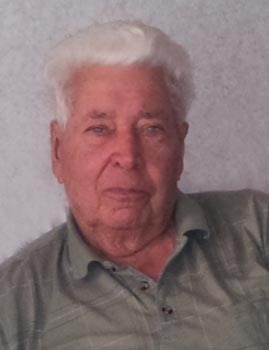 Fredric "Fritz" Schuler, 84 of Frazee, MN formerly of Wahpeton, ND, died Sunday July 21, 2013 at Perham Health, Perham, MN. The funeral will be 11:00 AM Friday, July 26, 2013 at Vukku Lutheran Church in Foxhome. The visitation will be Thursday July 25 from 4:00 to 7:30PM with a prayer service 7:00PM at Joseph Vertin & Sons Funeral Home in Breckenridge. Officiating is Pastor John Andrews. The interment will be at Vukku Lutheran Cemetery, Foxhome, MN.
Fredric Charles Schuler was born December 27, 1928 to Mabel (Raforth) and Asa Jay "A.J." Schuler in Welcome, MN. He attended school in Welcome, graduating in 1946. On October 6, 1946, Fritz was united in marriage to the love of his life, Maxine DeBus in Spafford, MN. He started a career that combined business and agriculture by building the fertilizer plant in Campbell, MN and he also did some farming with his dad. In 1952, he moved his family to a farm in rural Campbell where he raised livestock and farmed small grains. Eventually he sold the Campbell Fertilizer Plant and his livestock but continued grain farming. He retired from farming in 1973 and moved to Wahpeton in 1976.
Conservation was very important to Fritz and was referred to as the "Johnny Appleseed" of tree planting. As an avid collector, Fritz was proud of his extensive coin and stamp collection. Many fond memories were made on the hunting and fishing trips with his sons and friends. From 1968 to 1999 Fritz and Maxine were snowbirds to Mesa, Arizona. He was an active member of Vukku Lutheran Church, the El Zagel Shriners, Masons, Eastern Star, the Bois de Sioux Golf Club, and he served on the Campbell School Board for several years.
Fritz is survived by his wife of 67 years, Maxine; his sons Gary (Pam) Schuler of Moorhead, MN and their children Todd (Jeannine) Schuler, and Jenny (Dain) Miller; and Gregg (Judy) Schuler of Fargo, ND, and their son Ryan (Summer Gutknecht); his daughter-in-law, Darlene Schuler of Wahpeton, ND and her children Chad Schuler, Nathan (Heather)Schuler, Eric Schuler (sons of Mick); and grandchildren Amanda (Jon) Brazil (daughter of Tonya) and Nicole Slavik (daughter of Marc); 13 great-grandchildren and 1 great-great grandchild; his sisters Ione (Duane) Ringhand, Anita Miller, and Joan (Ralph) Lehman.
Fritz is preceded in death by his parents; two sons Marc Schuler and Michael "Mick" Schuler; and his daughter Tonya Schuler; his brother Lowell "Pete" and his sisters Corrine and Bernice.