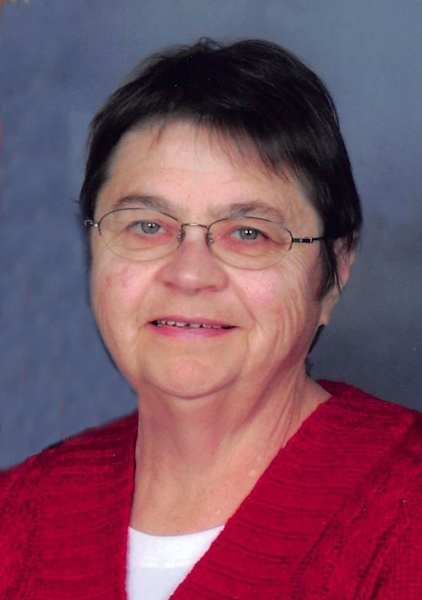 Gail Marie Olthoff, 78, of Breckenridge, MN died Monday, October 24, 2016 under the care of CHI Health at Home – Hospice at CHI St. Francis Medical Center in Breckenridge. Mass of Christian Burial will be held Thursday, October, 27, 2016 at 10:30 a.m. at St. Mary's Catholic Church in Breckenridge. Visitation will be Wednesday, October 26, from 5:00 to 8:00 with a Prayer Service at 5:30 p.m. followed by a Christian Mother's Rosary, at Joseph Vertin and Sons Funeral Home in Breckenridge.
Gail was born August 25, 1938, in Breckenridge, MN, the daughter of Alois and Aurelia (Holecek) Ehlert. She attended country schools in Kent, MN, Brushvale, MN and Center No. 4 south of Wahpeton, ND. She was a graduate of St. Mary's Catholic School in Breckenridge, and a 1956 graduate of Breckenridge High School. Following graduation Gail worked at Uncle Jim's Restaurant in Breckenridge.
On September 27, 1958, Gail was united in marriage to Rodney Leroy Olthoff at St Mary's. They made their home in Wahpeton for a short time before moving to Breckenridge, where they raised their family and have lived for the past 56 years. Gail was employed by the Breckenridge School District, working part time with special needs children while her own children were young. Later, she found employment at Cargill and then from 1978 to 1995, she worked full time at 3M in Wahpeton.
Gail was a member of St. Mary's Catholic Church in Breckenridge, where she taught fifth grade catechism for eleven years, and was also active with Guild and Christian Mothers. She was a member of the Breckenridge Fire Department Auxiliary and the Eagles Auxiliary in Wahpeton. In their younger years, Gail and Rodney loved to go dancing, and frequented the Legion Pavilion in Breckenridge, where they shared good times and made lasting memories with their friends. They maintained a large vegetable garden and looked forward to canning and freezing the fruits of their labor. More often than not, much of their produce was given away to family and friends.
As a devoted Catholic, Gail was a prayer warrior and a woman of strong faith. People were drawn to her sense of humor and her selfless, giving nature. She was a fabulous cook and welcomed people to her home with tasty food and warm conversation. Gail cherished every minute she could spend with her husband, children, grandchildren, great- grandchildren, and her many treasured friends.
Gail is survived by her husband, Rodney, Breckenridge, MN; her four children, Michael (Amae) Olthoff, Eagle Point, OR, Tim Olthoff, Breckenridge, MN, Kristi (Ken) Rastedt, Richville, MN, and Sherri (Tim) Kurtz, Wahpeton, ND; Her seven grandchildren, Josh Olthoff, Jeremy Olthoff and Jennifer (Asa) Burck, Kyla Olthoff, and Rob, Mariah and Abigail Kurtz, her step-grandchildren, Jon (Amber) Rastedt, Sarah Rastedt, and Stacy (Dan) Warpula; and her 13 great- grandchildren; her two sisters, Sharon (Lyle) Schramm, Renton, WA and Carole (Rodney) Johnson, Rolette, ND; Her three brothers, Robert Ehlert, Alsea, OR, Richard (Joanne) Ehlert, Albany, OR, and Gary (Patti) Ehlert, Fargo, ND, and many nieces and nephews and good friends.
She is preceded in death by her parents, Alois and Aurelia Ehlert, her sister-in-law, Sandy Ehlert, her great-grandson, Landon Olthoff and several good friends and relatives.
To order memorial trees or send flowers to the family in memory of Gail Olthoff, please visit our flower store.