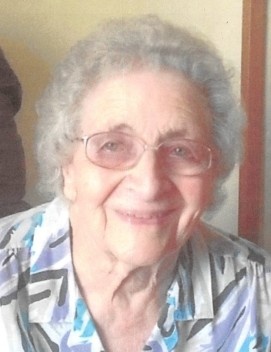 Genevieve ”Jenny”  Zoucha, 94, of Wahpeton, ND (formerly, Tintah, MN), passed away on Monday, January 20, 2020, at St. Catherine’s Living Center, Wahpeton. The funeral service will be held at 11:00 a.m., Saturday, January 25, 2020, at Joseph Vertin and Sons Funeral Home, Breckenridge with a Christian Mother’s Rosary beginning at 10 a.m., followed by the visitation prior to the service. Father Stan Wieser will be officiating. Burial will be held at St. Anthony’s Catholic Cemetery at a later date. Arrangements have been entrusted to Joseph Vertin and Sons Funeral Home, Breckenridge.

Genevieve, affectionately known as “Jenny,” was born in rural Campbell, MN, on November 19, 1925, to Joseph and Anna (Nennig) Schillinger. She grew up and attended school there, later graduating from high school in 1944, with an honorable achievement of Valedictorian. After her formal education, she worked various jobs throughout the community.

On September 17, 1946, Jenny was united in marriage to Benedict Zoucha in Tintah, MN. They made their home for the next 10 years in Lindsay, NE. During this time, they farmed and raised livestock. Jenny was actively involved in all the farm duties and enjoyed working alongside her husband. Jenny and Ben then went on to farm and raise their livestock in Campbell, MN and in 1967, bought a farm where they have since resided.

Throughout the years, Jenny enjoyed writing letters and keeping in touch with her many family members and friends. She also was a talented painter and baker, especially her loaves of bread which she shared with her family, friends, and neighbors. Jenny had a hardworking, generous, and loving spirit that will forever be cherished by her loved ones.

To order memorial trees or send flowers to the family in memory of Genevieve "Jenny" Zoucha, please visit our flower store.