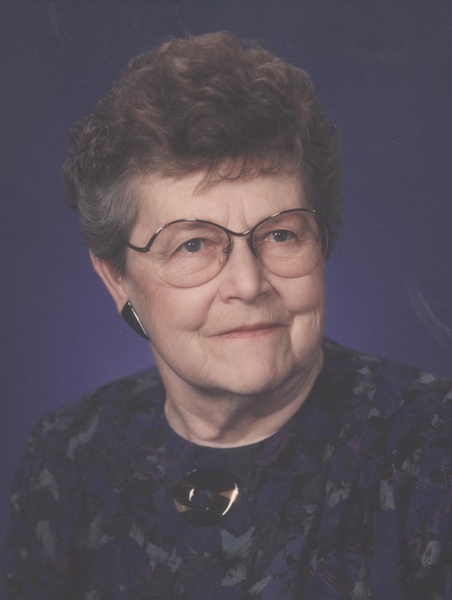 Geraldine "Gerry" Langseth, 91, died Sunday, December 1, 2013 at her home in Twin Town Villa, Breckenridge, MN. Visitation will be Thursday, Dec. 5, from 5-7 PM at Joseph Vertin & Sons Funeral Home, Breckenridge, with a prayer service at 7 PM. The funeral will be Friday, Dec. 6, at 11 AM in Breckenridge Lutheran Church with visitation an hour prior to the service.
Geraldine was born December 23, 1921 in Breckenridge to Harry S. and Selma (Ness) Matheson. She was the second of four children, including older brother Virgil, and younger brothers, John and Harry. Geraldine's character was formed growing up in the midst of the Great Depression. She had a deep love and respect for her family. Her father was a hard-working man of high moral integrity who became the Wilkin County Sheriff. Her mother was a teacher and a woman of great kindness who instilled the importance of family. Despite the lean years, Gerry had a great time growing up with her brothers and often liked to tell stories about their many adventures on the river.
Geraldine was a charter member of Breckenridge Lutheran Church which was formed in 1938. As a teenager, before the church was built, she taught Sunday School where they met upstairs of the City Hall. Geraldine was a woman of strong faith and served God and her church all of her life. On Mother's Day of 2013, she was proud to be honored at the church during their 75th Anniversary year.
Upon graduating from Breckenridge High School in 1939, Gerry worked for the Sagness Variety Store. Working full time for $4.40 per week, she bought gifts for her family and still saved enough money in one year to attend the State School of Science secretarial program. Upon completion of the program, she was hired as Secretary to the Superintendent of Schools in Breckenridge from 1941-1948. A favorite pastime during this time was dancing at the American Legion Pavilion and a "good dancer" she was. It was also during these years that Gerry met the love of her life and she married Verle Langseth on September 15, 1946. Verle served his country in the U.S. Army from 1946-1948, stationed in Korea, while she continued to "run" the office at the school.
Gerry and Verle first made their home in a tiny house on 11th street in Breckenridge, then in the Matheson home on 3rd street for a few years. They were blessed and became proud parents of four children, Jay in 1949, Linda in 1953 and the twins, Brian and Bette, in 1955. In 1956, they moved to the farm south of Breckenridge where they lived for 30 years. Gerry loved being a farmer's wife and embraced life in the country—gardening, raising sheep, hauling grain, and even learning to ride a horse. She was an excellent cook and always made holiday celebrations special for her family. She was a 4-H Leader and supported her children, and later her grandchildren, in everything they strived to accomplish in their lives. No sacrifice was too great. Through her unconditional love, she taught them to be strong, to do their best, and to know the rewards of hard work.
In the mid 1970's, the couple started heading south to McAllen, Texas during the cold winter months. They made many special friends in Texas and had a wonderful time traveling and experiencing different parts of the country. In the 1970's they purchased a lot on West Battle Lake, close to Verle's family, and started building a home there. They loved their time on the lake and moved there in 1985 with plans for retirement.
In 1986, the couple celebrated 40 years of marriage. Verle passed away Jan. 3, 1988. Gerry then lived in Wahpeton, ND, Fargo, ND with daughter Linda, back to Breckenridge in 2006, eventually moving into Twin Town Villa Assisted Living in 2011; still spending her summers at Battle Lake. She cherished life and was so grateful for all of the care and support she received in her later years.
Geraldine's legacy is as a positive role model of a loving wife, wonderful mother and grand-mother. She was a living example of true Christian ideals and a source of constant inspiration to those around her. Her goodness, wisdom, and boundless love will forever be treasured by those whose lives she touched in her own special way.
Geraldine is survived by: her four children, Jay (Claudia) Langseth, Breckenridge, Linda Manikowske, Fargo, Brian (Karen) Langseth, Breckenridge, Bette (Ellis) Doney, Lavina, MT; her eight grandchildren, Kristi (Jason) Imsdahl, Fargo, Derek (Shana) Langseth, Witchita, KS, Trista Manikowske, Greely, CO, Tara (Taylor) Stroh, Fargo, Talina (Jon) Skirko, Seattle, WA, Erica (Matt McAndrews) Silbernagel, Ryegate, MT, Amanda (Ryan Crouse) Langseth, Wahpeton, John Langseth, Breckenridge; her eleven great-grandchildren, Sam and Sari Imsdahl, Ruth, David, Esther, Elijah, Barnabas, Enoch, and Joshua Langseth, Blake and Lorelai McAndrews; her three brothers, Virgil and Harry Matheson, Breckenridge, John (Elaine) Matheson, Fargo; sister-in-laws Lorraine Langseth, Breckenridge, Doris Langseth, Battle Lake, and Ila Osman, Battle Lake; many nieces and nephews.
She was preceded in death by her husband and her parents.
To order memorial trees or send flowers to the family in memory of Geraldine Langseth, please visit our flower store.