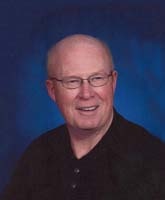 Interment will be at Riverside Cemetery in Breckenridge, MN

He was preceded by: His parents: George and Hazel Johnson; Two brothers in infancy

Glen Vernon Johnson was born November 11, 1947 in Northfield, MN to George V. and Hazel E. (Phillips) Johnson. He was 2 A½ years old when he moved with his family to the farm north of Breckenridge, MN. Glen attended Breckenridge schools and graduated from Breckenridge High School in 1965. He then attended NDSCS in Wahpeton, ND and soon began farming with his father. On November 14, 1970 Glen was united in marriage to Alice Leinen at Breckenridge Lutheran Church. Glen and Alice made their home and raised their four children on the family farm, where he loved to farm and did so until his death.

Glen was also involved in the community, where he was a member of the Breckenridge Lutheran Church, served on the church board, was also a member of the Cenex board, Connelly Township Board, and the Minn-Dak Trucking Committee. Glen was one of the pioneers in the area's sugar industry, being one of the initial shareholders of the Minn-Dak Farmers Cooperative. Glen, always active in his childrens' lives, attended many of their school and extra-curricular activities. He greatly enjoyed spending time at the lake, kayaking, water-skiing & boating, as well as snow skiing, hunting and taking annual vacations as a family. Through the most recent years, he enjoyed spending time with his grandchildren. Glen's most cherished loves were his family, farming and friends.

Glen would be amazed to see how many lives he has touched and for this we wish to thank everyone who has shown concern in anyway over the past few weeks. We have been truly touched by your outpouring of prayers and sincere acts of kindness. Although it seems to be so little in return, we thank you.

*** Memorials are preferred to the American Stroke Association****
To order memorial trees or send flowers to the family in memory of Glen Johnson, please visit our flower store.