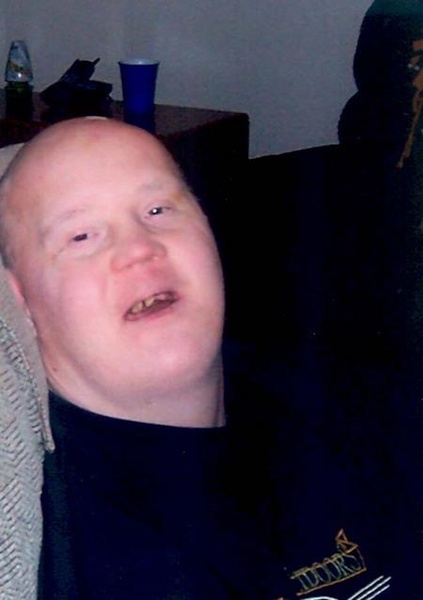 Glen LeRoy Smerud, 53 passed away on May 1, 2011 at the Golden Living Center, Battle Lake, MN. The funeral is Thursday, May 5, 2011 at 11:00 am at Joseph Vertin & Sons Funeral Home, Breckenridge, MN. Visitation is one hour prior from 10:00 am to 11:00am at the funeral home. Officiating is Pastor Mark Manning. Interment is at Faith Lutheran Cemetery, Wolverton, MN.
Glen was born on January 27, 1958 in Wilkin County to Arnold and Valborg (Volness) Smerud. Glen is the youngest of five siblings. He was committed under state guardianship on March 5, 1958 and was placed with the Oie Foster Home in Breckenridge, MN. In 1960, Glen was transferred to the Brainerd State Hospital. He then moved to the Alvin Bakke Group Home in Osakis, MN from 1971 to 1980. At that time he moved to the Wilkin County Group Home in Breckenridge. Glen eventually entered the residential setting and received vocational skill training at the Wilkin County DAC until retiring in 2008.
Glen enjoyed interacting with others, especially one on one time with staff. He was known for his sense of humor. He looked forward to participating in community activities but he was especially fond of the Special Olympics track and field, bowling and bocce ball. Glen enjoyed singing and playing guitar, listening to music and collecting hats, particularly black ones.
Glen is survived by his siblings Darlene (Curtis) Lawrence of Birmingham, AL; Dorsi (Richard) Davis of Hoover, AL; Joye (Lee) Sherrill of Birmingham, AL; Allan (Fern) Smerud of Plymouth, MN; and Vern (Lois) Smerud of Fargo, ND; his friends and the staff of West Central Community Services, Wilkin County DAC, and Golden Living Center. Glen is preceded by his parents Arnold and Marie (Volness) Smerud and his foster mother Esther Oie.
To order memorial trees or send flowers to the family in memory of Glen Smerud, please visit our flower store.