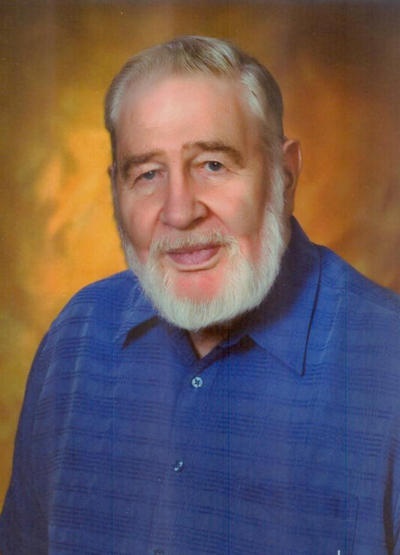 Gordon Herman Thiel, 81 of Wahpeton, ND died on Thursday, November 8, 2012 at St. Catherine's Living Center in Wahpeton, ND. The visitation will be at Joseph Vertin & Sons Funeral Home, Breckenridge, MN on Sunday, November 11, from 5 to 7:00PM with a rosary at 6:30 and prayer service at 7. The funeral will be at St. John's Catholic Church in Wahpeton on Monday, November 12 at 9:00AM with a visitation one hour prior to the funeral with Father Dale Lagodinski officiating.
Gordon was born on October 1, 1931 in Fargo, ND to LeRoy and Dorothy (Willette) Thiel. He attended grade school at Center Township #1 and graduated from Wahpeton High School in 1949. Gordon joined the Marine Corps in 1951, served in Korea and was honorably discharged in 1952 when he returned to farm with his dad. He then attended NDSCS for 2 years majoring in Auto Mechanics.
Gordon married Irene Harth on November 15, 1956 in Wahpeton. He raised cattle and feeder pigs until he began working for Farmers Union Oil Company (Cenex) in Breckenridge as their fertilizer manager. Gordon and his family moved to Wahpeton in 1966. He became the Cenex General Manager in 1968. He was on the MN Managers Coordinating Committee for Cenex, and after he retired, he helped organize the MN Cenex retired employees get-togethers.
Gordon was active in local service organizations including the Buffalo Club, Lion's Club, Knights of Columbus and the Red River Trap Club. He also had life memberships in the Woody Keeble VFW Post 4324, Hafner-Miller Ross American Legion Post 20 and the Military Order of the Cooties.
Gordon and Wendell Langendorfer were instrumental in getting the Medal of Honor for Woody Keeble and also helped get Woody into the ND Roughrider Hall of Fame. Gordon was very active in the Vets Club and served on the Board of Directors for many years during which time he helped erect five different Veteran Memorials. He was also Commander of the VFW for several years. Another project that was near and dear to Gordon was to get an airplane at the VFW Park in south Wahpeton. Gordon, Wendell Langendorfer and many volunteers worked hard to see the project through.
Gordon and Irene found much joy in entertaining family and friends; organizing class reunions, family reunions, and 4th of July celebrations. They traveled extensively in the US and Canada but also many countries abroad, including most of Europe, Mexico, New Zealand, Australia, Singapore and some South Pacific Islands. Another traveling highlight was when he and Darrell Miller went to Kazakhstan in 1994 to help organize a Co-op.
When he wasn't busy working and serving in his community, Gordon enjoyed TV, hunting, golfing, old pro softball, and woodworking. His intarsia and scroll saw works may be found in several Veterans Clubs and homes around the United States. He valued his many friends, his children, grandchildren and great- grandchildren.

Gordon is survived by his wife of 55 years, Irene; his 2 daughters Tammy (Patrick) Teehan of Houston, TX and Kathy (Mike) Matejek of Wahpeton, ND; his 9 grandchildren and 9 great-grandchildren; and his sister Muriel Domm.
He was preceded in death by his parents LeRoy and Dorothy; and his 2 sons Tom and Bill.
To order memorial trees or send flowers to the family in memory of Gordon Thiel, please visit our flower store.