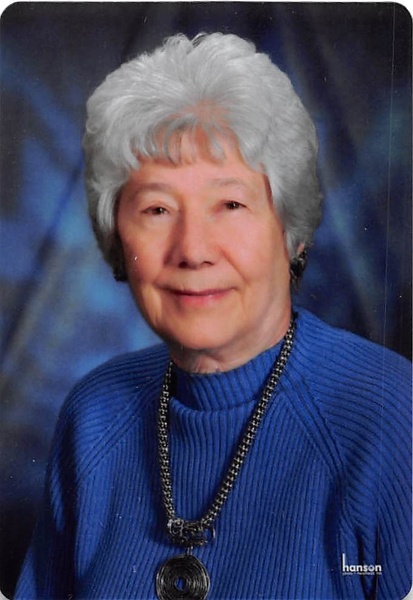 Grace Vivian Valeske, 81, of Breckenridge, MN, passed away at her home with family by her side, on Thursday, August 11, 2016. The visitation will be from 5:00 to 8:00 PM with a prayer service at 7:00, on Monday, August 15, at Joseph Vertin and Sons Funeral Home in Breckenridge. The visitation will continue on Tuesday, August 16, at Breckenridge Lutheran Church from 10:00 to 10:45 AM, followed by the funeral service at 11:00 AM. Pastor Mark Manning will officiate. The interment will be at a later date at Mount Hope Cemetery in Ashland, Wisconsin.
Grace was born in Ashland, Wisconsin, on February 1, 1935, one of four children born to Carl and Esther (Nelson) Peterson. Following graduation from Ashland High School in 1953, Grace worked in the business office at Trinity Hospital and then as a secretary at Lake Superior District Power Company, both in Ashland. She was united in marriage on April 30, 1955, to Gary Tate Valeske in Ashland. The couple made their home in Grand Forks, North Dakota where she was employed at Rydell Chevrolet and then in the business office at the Grand Forks Clinic. Grace and her family moved to Breckenridge in 1965 when Gary started teaching at North Dakota State College of Science in Wahpeton. Following his teaching career Gary launched a CPA firm in Wahpeton. Grace utilized her office skills and together they built a successful business. After Gary passed away in 1997, Grace worked part-time in the Wilkin County FSA office.
Grace was an active part of her children's lives as they were growing up. She served as an AFS officer while they were in high school. They opened up their home to Eva Kain Schnabel, an Austrian AFS Exchange Student, which in turn began a bond that was caringly nurtured over the years. She was an active member of Breckenridge Lutheran Church and enjoyed being a part of Faith Care-n-Share, BLW quilting group, and bible study group.
Grace had a special love for music and was blessed with a wonderful singing voice. From a young age, she was asked to sing for weddings and other social occasions. Some of her favorite memories were of singing in the church and community choirs. Grace received much joy in sewing quilts for her children and grandchildren. When her hands weren't busy with sewing, she would pick up her knitting needles and crochet hooks and craft with yarn.
Grace is survived by her children, Mark (Juli) Valeske of Portland, OR, Dean (Marion) Valeske of Mellen, WI, David (Veronica) Valeske of Atlanta, GA, and her daughter, Joy Valeske of Odenton, MD; her seven grandchildren, Jessica (Erik) Valeske, Christopher Valeske, Corissa Stockert, Austin Valeske, Steven Valeske, Jared Valeske, and Jennifer Valeske; her siblings, Beatrice Igo and Jerry (Mary Kaye) Peterson, and sister-in-law, Donna Peterson all of Ashland, WI; her AFS student, Eva (Karl) Schnabel of Gleinstratten, Austria. Grace is preceded in death by her parents, Carl and Esther; her husband, Gary; her brother, Donald Peterson; and her brother-in-law, Gary Igo.
To order memorial trees or send flowers to the family in memory of Grace Valeske, please visit our flower store.