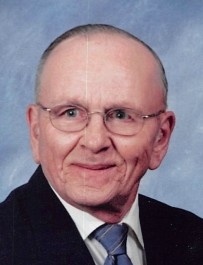 Harold E. Hansen, 90, of Breckenridge, MN, passed away at St. Catherine’s Living Center, Wahpeton, on Thursday, September 10, 2020. The funeral service will be held at 11 a.m., Tuesday, September 15, 2020, at Joseph Vertin and Sons Funeral Home, Breckenridge, with a visitation one hour prior to the service. Burial will be at Fairview Memorial Gardens, Wahpeton. His care has been entrusted to Joseph Vertin and Sons Funeral Home where condolences can be left at www.josephvertinandsons.com.

Harold was born in rural Rothsay, MN, on August 18, 1930, to Alfred and Lillie (Jacobsen) Hansen. He grew up and attended rural country school through the 8th grade and went on to help his family on their grain farm. After this, he began his lifelong career as a mechanic, working for several ford dealerships throughout the area until his retirement.

On July 3, 1975, Harold married the love of his life, Audrey Mattson, in Sisseton, SD. They made their home in Morris, MN, and later, Breckenridge, MN.

Throughout the years, Harold had a passion for fishing and always looked forward to their annual Swan Lake vacation. For a week, each year, they would enjoy boating and being away from the regular hustle and bustle of life. Harold was a simple man who took pride in his mechanical expertise and above all, cherished his dear wife until her passing in 2015.

The family would like to extend their deepest gratitude for the exceptional care Harold received from his caregiver, Heidi Bergquist.

To order memorial trees or send flowers to the family in memory of Harold Hansen, please visit our flower store.