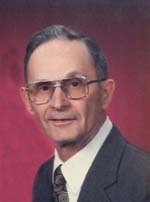 Visitation will be Wednesday, January 13, 2010 from 4p.m. to 8p.m. with a prayer service at 7 p.m. at Joseph Vertin & Sons Funeral Home, . There will also be visitation for one hour prior to the funeral at the church.

Pallbearers will be Harold’s five sons and his brother-in-law, Kenneth Olson.

Harold was born to Roland Matz and Angeline (Osmondson) Matz on March 15, 1923. He was baptized at , , on April 29, 1923. Harold was confirmed at in Wahpeton, ND on May 23, 1937. He attended country school at District 83 in and graduated from in 1940. He attended North Dakota State College of Science in Wahpeton and studied Business Administration. His first job was as a bookkeeper for Citizen’s National Bank in Wahpeton.

Harold married Mildred Hein on November 11, 1945 at . Harold and Mildred lived and farmed on the family homestead in until retiring and moving to Breckenridge in 2007.

Harold’s passions were his family, his farm, and his Lord. He greeted each day by reading scripture. He led many Bible studies and did extensive journaling about day to day life. His farm became a Century farm in 2000. He received numerous awards for his crops at local and regional shows. He was the recipient of soil conservation awards and took pride in the stewardship of his land. In 1998 he received the Outstanding Agri-Business award from the Breckenridge Chamber of Commerce.

Harold was a member of , until its closure in 2002. He then transferred to in Breckenridge. While at , Harold served as a Sunday School teacher, Bible Study Leader, Elder, and other offices. Harold was also a member of the Gideons.

He was preceded in death by his parents: Roland and Angeline Matz; his sisters, Doris Ballard, Treva Ujka, and infant sister; and his nephew, Mark Ballard.

In lieu of flowers the family requests memorials be given to Grace Lutheran Church of Breckenridge .

To order memorial trees or send flowers to the family in memory of Harold Matz, please visit our flower store.