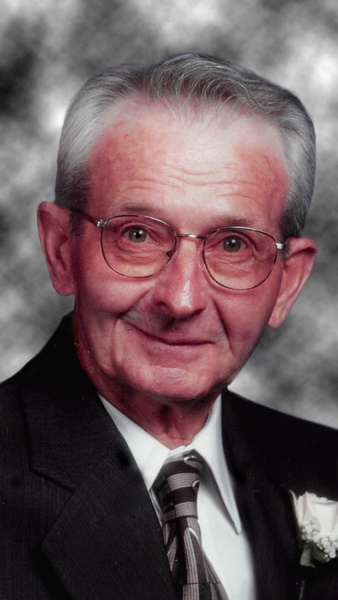 Harold “Ted” Beckius was born on the family farm in rural Nashua, Minnesota on November 24, 1927. He was one of three children born to Edward and Ida (Rinker) Beckius. He attended grade school in Nashua and graduated from Tintah High School in 1945. During those high school years Ted met the love of his life, Lavonne Herman, and they were united in marriage on December 11, 1949. After marrying, he took over the family farm where they worked together. In 1964 Ted also began working for the SOO Line Railroad. He started as a section laborer in Nashua and was promoted to track inspector which he managed from Glenwood to Enderlin. After retiring from the railroad in 1990, Ted started farming for Harris Richardson; his favorite part of his time there was driving the “CAT” tractor. He eventually worked for JLR Farms and ultimately retired at the age of 88.  Ted was particularly fond of his caretaking of the Nashua cemetery which he maintained for 18 years.

Ted was a devout member of the Faith Community Church in Campbell, MN where he served on several boards and was their treasurer for the last 15 years. Ted enjoyed holiday get togethers, trips to the lake, watching the Twins, Timberwolves and the Vikings.

Ted is preceded in death by his parents; Edward and Ida (Rinker) Beckius; and his sister Rose Holland.

To order memorial trees or send flowers to the family in memory of Harold "Ted" Beckius, please visit our flower store.