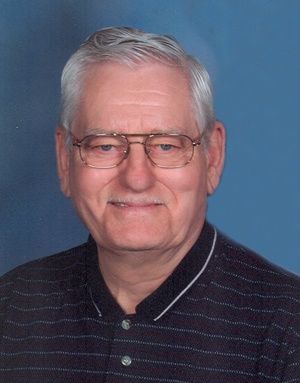 Harvey Ostby, 78 of Breckenridge, MN died on October 11, 2012 at St. Catherine's Living Center in Wahpeton, ND. The visitation will be at Joseph Vertin & Sons Funeral Home in Breckenridge on Thursday, October 25 from 4:00 to 8PM with a rosary at 6:30 and a prayer service at 7:00. The funeral will be Friday, October 26 at St. Mary's Catholic Church, Breckenridge at 2:00PM with Father Peter Kirchner officiating. The interment is at St. Mary's Catholic Cemetery in Breckenridge.
Harvey was born on August 6, 1934 to Henry and Rosella (Truehl) Ostby in Erskine, MN where he grew up and attended school. After graduation, he joined the Army and was stationed in Barstow, CA for two years. On November 22, 1955 Harvey was united in marriage to Carol Roy at St. Lawrence Catholic Church in Mentor, MN. After his discharge from the Army, he worked as a mechanic and helped run a local full service station in Erskine and in Crookston, MN. He then attended NDSCS, Wahpeton, ND for Auto Mechanic. In 1965, Harvey moved to Breckenridge, where he began a career teaching Parts Management at NDSCS. He retired from the college in 1996.
Harvey had a passion for officiating. He spent many nights on the road refereeing football and basketball. In the summer, he changed his officiating hat for an umpire's mask and umpired softball. He served as Umpire in Chief for many years. When he wasn't teaching, refereeing or umpiring, he spent his time doing small engine repair. Harvey was an active member of St. Mary's Catholic Church, the American Legion and Special Olympics. In his spare time, he enjoyed bowling, card club, seasonal camping and going to the Vets Club.
Harvey is survived by his children, Robert (Lorrie) Ostby of Monticello, MN; Kathy (Mike) Lenk of Breckenridge, MN; 6 grandchildren, Zachary (Bree) Marino, Alexa (Lael) Rockwell, Tyler Marino, Joseph Lenk, Christopher Lenk, and Michelle Lenk; his son-in-law Andres Marino of Villa Park, CA; his sister Luella Ostby of Erskine, MN; his brothers Leroy (Pat)Ostby of St. Hilaire, MN , Wally (Linda) Ostby of Tucson, AZ, Ronald (Ruth) Ostby of Thief River Falls, MN; and sister-in-law Ann Marie Roy of Reno, NV.
Harvey is preceded in death by his wife Carol Ostby (2011); his parents Henry and Rosella, his daughter Angela Marino and his son Wesley Ostby in infancy.
To order memorial trees or send flowers to the family in memory of Harvey Ostby, please visit our flower store.