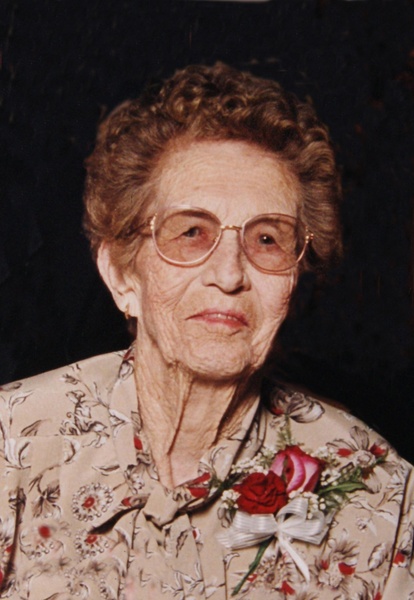 Her funeral service will be held on Thursday, January 7, 2010 at 2:00 PM at the Joseph Vertin & Sons Funeral Home Chapel, , with Pastor Harry Olson officiating.

Visitation will be Wednesday, January 6, 2010 from 1 PM to 3 PM with a prayer service at 2 PM at the Pioneer Retirement Community, . There will also be visitation one hour prior to the funeral at the funeral home.

Hazel was born on August 18, 1915 in to Dougal and Katherine (Warzecka) Stewart. She grew up and attended school in the Holdingford area.

On February 25, 1936 Hazel was united in marriage to Theodore F. “Ted” Steenbock in Sisseton, SD. They farmed on the home farm near where they raised their three children. Ted Sr. preceded her in death on July 22, 1991. Hazel continued living on the farm until 2002, when she became a resident of Pioneer Retirement Community in .

Hazel was a devout member of ’s in after her marriage. She loved the farm life, including chickens, mowing lawn, gardening, and being barefoot. She enjoyed her pets, “Chubs” the dog and “Lady Cat.” Hazel was an avid reader and especially loved spending time with her family and sharing gumdrops with them.

Memorials may be made to the Pioneer Foundation in Hazel’s memory, for the new nursing home to be completed in 2011. (More information can be found by calling 218-739-7700.)

She was preceded in death by her parents: Dougal and Katherine Stewart; her husband: Ted Steenbock Sr.; her brother: Lawrence Stewart; her sister: Lorraine Lenzen; and her son-in-law: Kenneth Henriques.

To order memorial trees or send flowers to the family in memory of Hazel Steenbock, please visit our flower store.