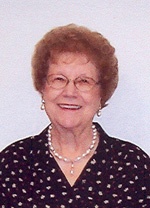 Her funeral will be on Monday, April 27, at 10:30 a.m. at St. Mary’s Catholic Church, Breckenridge, with Fr. Richard Benson and Fr. Ken Popp concelebrating the

Visitation will be on Sunday, April 26, from 5:00 p.m. to 7:00 p.m., with a Christian Mothers Rosary at 5:30 and a Prayer Service at 7:00 at Joseph Vertin & Sons Funeral Home, Breckenridge. There will also be visitation one hour prior to the funeral at the funeral home.

Helen Madeline Zarling was born April 9, 1916 in , the daughter of Richard and Lillian (Weyer) Zarling. At the age of three, her family moved to , where Helen grew up. She attended St. Mary’s Catholic School, graduated from Breckenridge High School in 1934, and furthered her education taking business courses at NDSCS in Wahpeton, ND. Helen then began working for Triple A Program and later worked as a secretary to the Wilkin County Agricultural Agent. In 1942, Helen began working for the Farmers and Merchants State Bank (now Bremer Bank) in Breckenridge, as a bookkeeper/teller. She retired as Vice President/Operations in 1981.

Helen was a member of St. Mary’s Catholic Church in Breckenridge, Christian Mothers, St. Mary’s Guild, , the National Association of Bank Women, Quilters Guild and the Dollars for Scholars Bridge Group. In the past she has served on the Board of Directors for St. Francis Nursing Home, Riveredge Hospice, the and St. Mary’s Parish Council. She was also a charter member of the Zonta International Club of Breckenridge/Wahpeton, and was a 4-H Leader and a Boy Scout Den Mother.

Helen enjoyed playing Bridge, attaining “Life Master” of the American Contract Bridge League. She also enjoyed sewing and quilting, and was drum major for the prize winning American Legion Drum and Bugle Corp. She was an avid golfer for many years and later enjoyed following the PGA Tour on TV. Helen was also an ardent Minnesota Twins baseball fan and faithfully watched every game on TV. After retirement she kept the books for St. Mary’s Church for 15 years, a volunteer job she very much enjoyed.

To order memorial trees or send flowers to the family in memory of Helen Zarling, please visit our flower store.