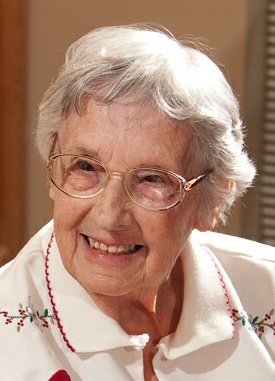 Henrietta Octavia Ehlert, 96, of Breckenridge, MN, passed away on Sunday, February 15, 2015, at St. Francis Hospital in Breckenridge. The Mass of Christian Burial will be at 10:30 AM on Saturday, February 21, at St. Mary's Catholic Church in Breckenridge. Father Joseph Backowski is the Celebrant. The visitation will be from 5:00 to 8:00 PM, on Friday, February 20, at Joseph Vertin & Sons Funeral Home in Breckenridge. The prayer service will be at 5:30, followed by a Christian Mother's Rosary. The interment is at St. Mary's Cemetery in Breckenridge.
Henrietta Lovdokken was born at Woodhull, ND, on December 26, 1918, one of six children born to Ulrich and Anna (Geiger) Lovdokken. She grew up and attended school at Brushvale, MN. On November 6, 1934, Henrietta was united in marriage to Leo Ehlert at Brushvale. Together they farmed north of Breckenridge for 35 years, then in 1968, moved into Breckenridge. Henrietta worked at Mary Ann's Shoe Box in Wahpeton, ND for a time, then, worked as a cook at St. John's Catholic School in Wahpeton for the next 12 years. After retiring, Henrietta looked forward to daily outings with her coffee group where many cherished friendships were formed. She was a devoted wife and mother and delighted in the company of her grandchildren. She closely bonded with the staff and residents in the five years she spent at St. Francis Nursing Home.
As an avid collector of salt and pepper shakers, Henrietta had 700 pair at one time. She also collected Rosemeade pottery and loved spending time in her flower garden. She was a long time active member of St. Mary's Catholic Church and Christian Mothers.
Henrietta is survived by her children, Lois (John) Ham of Fargo, ND, LeRoy (friend LeeAnn Carlson) Ehlert of Breckenridge, MN, Loren (Debra) Ehlert of Omaha, NE, and James (Debrah) Ehlert of Breckenridge, MN; her 12 grandchildren, 24 great- grandchildren, and 3 great-great grandchildren; her brother, Ulrich (Cora) Lovdokken of Wahpeton, ND; and special friend, Judy Wanek of Breckenridge. She is preceded in death by her parents, Ulrich and Anna, her husband, Leo (February 23, 1992); a great-granddaughter, Eva and great-grandson, Chase; her brothers, Bruce, LaVerne, Arnie and Robert; and her daughter-in-law, Betty.
To order memorial trees or send flowers to the family in memory of Henrietta Ehlert, please visit our flower store.