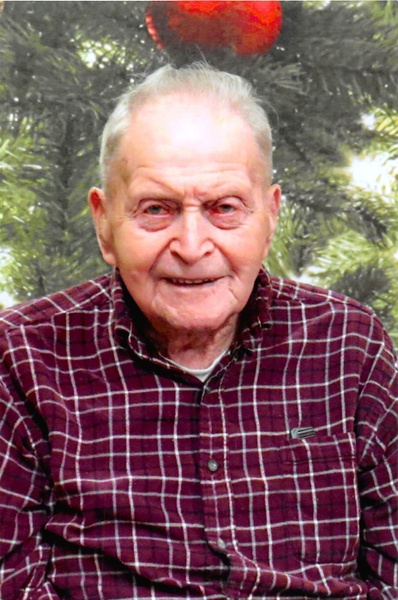 Henry was born in Billings, MT, on October 1, 1924, to John and Sarah (Grussing) Bontjes. He grew up and attended school in rural Breckenridge, MN. After his formal education, he was employed at a large dairy farm near St. Paul, MN.

In December of 1944, Henry enlisted in the United States Army and honorably served his country until June of 1946. While he was stationed abroad, he received letters every day from his girlfriend, Ruth Haslerud, who later became his wife. They were united in marriage on September 18, 1947, in Rothsay, MN, and they then made their home on a farm east of Breckenridge. In 1958, they moved to a farm near Kent, MN, where they farmed for seven years; they moved to a farmstead north of Wahpeton, ND. During this time, Henry worked as a truck driver for Schweitzer’s Flax Plant in Breckenridge. While working at the flax plant, Henry also specialized in custom bailing, which he continued to do until he was 80 years old. The couple purchased a farmstead south of Breckenridge in 1972, where Ruth carried out the rest of her life until passing away on February 26, 1999. Most recently, Henry entered the Fergus Falls Veterans Home in February of 2016, where he received excellent care.

Henry was a man of strong character and had a devout work ethic. His love for his family and the great outdoors filtered through every area of his life and was especially evident in the many traditions he established with his loved ones. Among these were many fishing trips, lawn mower rides, and, as his grandchildren grew up, tractor rides. Henry enjoyed deer hunting almost as much as he enjoyed gathering with friends and family to make deer sausage afterwards. Henry enjoyed using his old, leaky wood boat, taking along his coffee can to bail out the water that would seep in through the bottom of the boat. He had a deep appreciation for the Minnesota Twins and listening to “Lutheran Hour” on the radio Sunday mornings. He also loved singing gospel songs, playing the harmonica, and tending to his large gardens.

To order memorial trees or send flowers to the family in memory of Henry Bontjes, please visit our flower store.