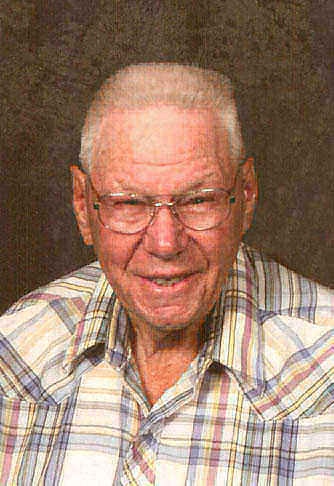 Hubert "Arnie" Henderson, 84 of Foxhome, MN died at his home on June 7, 2012. The visitation is at Joseph Vertin & Sons Funeral Home, Breckenridge, MN Sunday June 10 from 5 pm to 8 pm with a prayer service at 7 pm. The funeral is at Grace United Methodist Church in Fergus Falls, MN, Monday June 11 at 11:00 am. There is a visitation one hour prior to the funeral. Reverend Robert Kandels is officiating. The interment is at the Foxhome Cemetery, Foxhome, MN.

Arnie was born on August 27, 1927 to Chester and Frances (Lill) Henderson in Fergus Falls, MN. He grew up and attended school in Foxhome, MN. After he completed his schooling, he went to work for various farmers. On February 18, 1951 he was united in marriage to Flo-Ellen Willemssen at the United Methodist Church, Breckenridge, MN. That same year he entered the Army attending basic training with the 1st Armored Division of Ft. Hood, Texas. He completed additional training in Atlanta, Georgia. His division was deployed to Germany and France where he managed the painting crew restoring military trucks. After being discharged from the army in 1953, Arnie and Flo-Ellen moved back to Foxhome and worked side by side in the operations of their farm, raising cattle and crops. He went to work for a Fergus Falls construction company owned by Pete Ion and Ben Ness. From 1955 to 1980, he worked the 4:00 to midnight shift for Ottertail Power Company in Fergus Falls as custodian and later as building and grounds supervisor. He retired from the power company in 1989 but no matter what job was helping to pay the bills; Arnie's real passion was the farm. Flo-Ellen preceded him November 22, 1994.
In his leisure time, Arnie enjoyed hunting and was an avid spear fisherman. He knew his way around the kitchen and loved to lend a hand in baking and cooking. He also took pleasure in a good game of cribbage.
Arnie is survived by his two sons Rodger (Sharon) Henderson and Russell (Roxanne) Henderson both of Foxhome, MN; his daughter Darla (Merlyn) Krause of Breckenridge, MN; his fiancé, Charlotte Johnson of Foxhome, MN; his six grandchildren; his sister Adeline (Doyle) Copeland of Blaine, MN and several nieces and nephews.
Arnie is preceded by his wife Flo-Ellen; his daughter Lynnette; his grandson Scott Krause; his sister Alvina Smith; and his parents Chester and Frances
To order memorial trees or send flowers to the family in memory of Hubert Henderson, please visit our flower store.