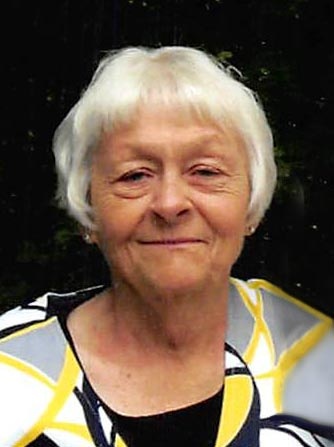 Jacqueline “Jackie” Blaufuss, 80, of Breckenridge, MN, passed away on Thursday, August 5, 2021, at Twin Town Villa in Breckenridge.  Visitation will be held on Sunday, August 8, 2021, from 4:00 PM to 6:00 PM, followed by a Rosary at 5:45 PM, and a prayer service at 6:00 PM at Joseph Vertin and Sons Funeral Home in Breckenridge.  Her Mass of Christian Burial will be held on Monday, August 9, 2021, at 10 AM at St. Mary’s Catholic Church, with FR. Leo Moenkedick officiating.  Burial will be held at St. Mary’s Catholic Cemetery.  Arrangements have been entrusted to Joseph Vertin and Sons Funeral Home.

Jacqueline Ann Nelson was born on July 9, 1941, to Curtis and Elaine Nelson in Fergus Falls, MN. She grew up there and graduated from Fergus Falls High School in 1959. She furthered her education at St. Francis School of Nursing, graduating in 1962. It was there she met the love of her life, James Blaufuss in room 219 bed 1, a bit ill, but very charming. On August 11, 1962, Jackie and James were united in marriage at Our Lady of Victory Catholic Church in Fergus Falls. Together they had four children, Mark, Kathy, Michael, and Christie, and raised their family in rural Breckenridge. She worked at St. Francis as a RN before deciding to be a full-time homemaker.

Jackie was very proud of her family. Together they spent many summers at Twin Lake Landing. She enjoyed quilting, canning, gardening, cooking, and baking. Many people loved her famous caramel rolls and apple pies. Jackie also found enjoyment in doing volunteer work in the community. She was a member of Christian Mothers and St. Agnes Mission and always felt called by the Lord to serve others.

Jackie has touched the lives of so many people. Her precious, generous, and all around wonderful spirit will forever be missed by her son, Mark (Peggy) Blaufuss; and their children, Jordan (Alicia) Blaufuss, Turner (Hannah) Blaufuss, and Nate (Tayler) Blaufuss; her daughter, Kathy (Keith) Kutter; and their children, Bryan (Amanda) Kutter, Ryan (Whitney) Petersen, and Dylan (Katelynn) Kutter; her daughter, Christie (Lars) Bergmann; and their children, Chloe (David) Bergquist and Chelsea (Zarek) Reiff; brothers, Don (Valerie) Nelson and Tom Nelson; 11 great-grandchildren; several family members, friends, and all who called her “Mama Jackie.”

The family would like to thank the staff at Twin Town Villa and CHI Home Health and Hospice for their kind and compassionate care during these last 20 challenging months.

To order memorial trees or send flowers to the family in memory of Jacqueline "Jackie" Blaufuss, please visit our flower store.