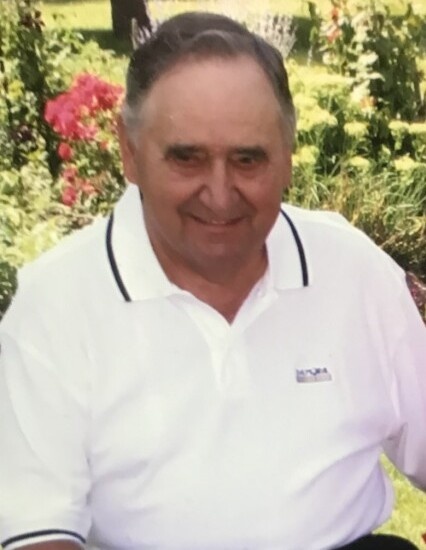 Blake Shelton sings about a man who quietly tills the soil, day in and day out, in “God’s Country.” Such a man quietly succumbed to a virus gripping our nation.  James Donald Klein, age 83, died on Saturday, October 10, 2020 at Essentia Hospital, Fargo.  A public visitation service will be held, receiving line style, at Joseph Vertin and Sons Funeral Home, Breckenridge, Monday, October 19, from 5-7 p.m. COVID precautions will be taken, masks and distancing required. A private family service will follow the visitation.  A public committal service will be held Tuesday, October 20, 11 a.m., at Riverside Cemetery, Breckenridge. Pastor Phil Blom will officiate.

James “Jim” Klein was born September 14, 1937, to Henry and Jessie Mae (Burhans) Klein in Breckenridge.  He spent his life in the community and on the farm, leaving for one year to attend college.  His love of nature and the outdoors were obvious in all his activities.  If he was not on the seat of a tractor or combine, he was golfing, hunting, fishing, custom harvesting or spending time at the cabin on Ottertail Lake with the family.  He lived for his kids, grandkids, and great-grandkids.  Jim was a strong supporter of their high school sports in both Breckenridge and Wheaton, attending as many games as the farm would allow.  He optimistically cheered on his Vikings and Twins as well.  Known as one of the most social people in history, Jim could be found with his “Coffee Crew” enjoying a cup of java on a very regular basis.

He is preceded in death by his parents.

James’s care was entrusted to Joseph Vertin and Sons Funeral Home where condolences can be left and a video of his service is available at www.josephvertinandson.com.

To order memorial trees or send flowers to the family in memory of James Klein, please visit our flower store.