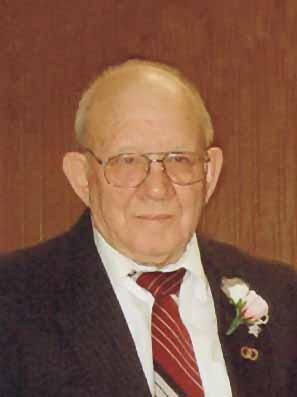 Burial will be at St. Mary's Cemetery, Breckenridge. Military honors by the Wilkin County Honor Guard.

James Leslie Miller was born March 4, 1931 at Herman, MN, the son of Dora (Gillen) Miller and Oddie Miller. He was educated in the Herman School System through the 12th grade where he participated in all of their sports programs. Later he attended Phoenix Technical Institute in Phoenix, AZ. In 1951 he enlisted in the U. S. Navy and served four years aboard the U. S. S. Eaton DDE 510 operating out of Norfolk, VA.

On November 28, 1953, he was united in marriage to Angie Pechlat in Herman, MN. Upon discharge from the Navy the couple lived for four years in Phoenix, where Jim was employed by a grocery chain. They later moved back to Herman and operated a cafAC. and then moved to Breckenridge where Jim was employed at several grocery stores including Jubilee Foods. After retiring, Jim also did some work for Matheson Movers of Breckenridge.

Jim was proud of his military service and was very active in the American Legion Post #53, VFW Post 2766, and the Military Order of Cootie Pup Tent #3, being Life Member and Past Commander of each organization. Jim also served in the Wilkin County Honor Guard for many years and was a member of the Fraternal Order of Eagles Aerie #2749.

Jim enjoyed having coffee with his friends at the Northern Grille, camping with his family at Lake Ida, annual trips to Branson, MO, and was always an avid sports fan. He genuinely liked people and considered everyone his friend. He will be missed by many.

To order memorial trees or send flowers to the family in memory of James Miller, please visit our flower store.