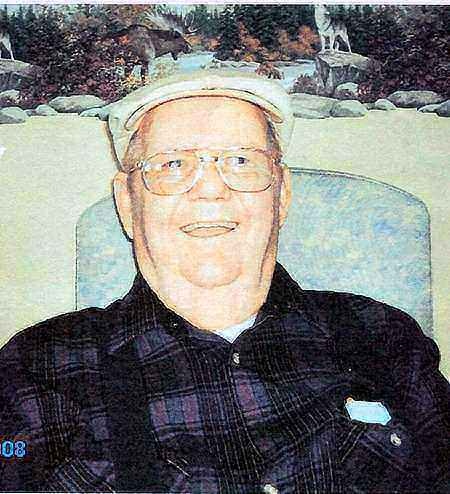 James William Mohs, 84, passed away on Wednesday, September 28, 2011 at St. Catherine's Living Center, Wahpeton, ND. The funeral will be at Immanuel Lutheran Church, Wahpeton, on Tuesday, October 4 at 11:00 am. Visitation will be one hour prior to the funeral at the church. Officiating is Pastor Morris Stevens. Interment is at Fairview Memorial Gardens in Wahpeton.
James "Porky" Mohs was born on March 28, 1927, the oldest of six children, to Charles and Bertha (Albright) Mohs in Breckenridge, MN. He attended school in Wahpeton. He moved with his family to Edgely, ND and in December of 1941 entered the US Navy. He served in the Pacific. Upon his discharged in 1946, he returned to Wahpeton and worked on local farms until beginning his truck driving career with Peavy Company. Porky retired from trucking in1996 and lived in Rothsay for a short time before moving to Breckenridge, MN. He became a resident of the Veteran's home in Lisbon, ND in March of 2008 and for the last 3 years he lived at St. Catherine's Living Center, Wahpeton.
Porky enjoyed playing cards and spending time with his family and friends. He is survived by his brother Delmar (Pauline) Mohs of Wahpeton, ND; his sister Arlene Rensvold of Wahpeton, ND; his step children Kenny Rhodes of Rothsay, MN, Danny Rhodes of Sidney, MT, and Rhonda Dasinger of Sidney, MT and several nieces and nephews.
Porky is preceded in death by his parents Charles and Bertha Mohs; his sisters Arlitta, Magdalene, and Marlys.
To order memorial trees or send flowers to the family in memory of James Mohs, please visit our flower store.