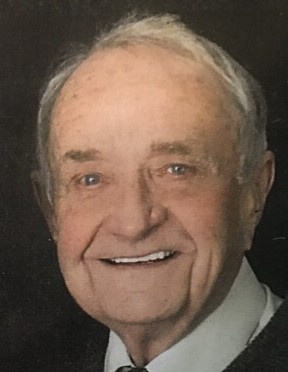 On October 29, 2020, James Peter “Jim” Moulsoff, age 86, of Plymouth, MN, formerly of Breckenridge, MN, passed away surrounded by family at North Memorial Hospital in Minneapolis. A Funeral Mass was held on Monday, November 2, 2020, at 11 AM at St Joseph the Worker Catholic Church, in Maple Grove, MN.  There will be a visitation on Friday, November 6, 2020, at Joseph Vertin and Sons Funeral Home, Breckenridge, from 12:30 PM to 1:30 PM, followed by his burial at 2:00 PM at St. Mary’s Catholic Cemetery, Breckenridge.

Jim was the youngest of nine children born in Barney, North Dakota to Clara (Radka) and Peter Moulsoff. He and his brother were bookends to seven sisters. After high school, Jim entered the United States Army where he served from 1952 until 1955. He was stationed in Nevada at the location of the Atomic Bomb Test Site, where he witnessed the detonation of 13 atomic bomb experiments. He returned home and attended North Dakota State School of Science where he completed his Associate's Degree in Civil Engineering. He worked for Wilkin County in a variety of capacities and then for the Minnesota Department of Transportation for many years until his retirement.

In 1955, Jim met the love of his life, Lenore Keaveny, at The American Legion Ballroom (the “Pavilion”) at the St. Patrick’s Day dance. They married on July 9th, 1958, and held their wedding dance at the Pavilion. Their enthusiasm for music and dancing never waned, as they managed the Pavilion for 21 years from 1962 until 1983. Jim loved to talk about the musicians they booked and his strategy for getting the big names to show up.  They met many famous musicians over those years and their first show featured Conway Twitty. Managing the Pavilion became a family affair and instilled a love of “old-time” music and dancing within the whole family.  This included annual pilgrimages to “Polka Days” in the New Ulm area for many years. In his later years, if you visited Jim on his front patio, there was always polka music playing in the background.

Jim and Lenore raised six children and were blessed with 10 grandchildren and 11 great-grandchildren. He is preceded in death by his oldest daughter Jacinta, his parents, his brother Polycarp and his sisters Lorraine, Bridget, Madelyn, Lucian, Ramona, and Jeanette. He is survived by his wife Lenore, his sister Patricia, his children and grandchildren: Paul (Vicki)- Katie, Jamie, and Erika; Mary- Jacinta, Stephanie, William and Thomas; Jim (Norine); Patrick (Gennette)-Julian; and Michael (Jan)- Maleta and Leo; former daughter-in-law Lisa, former son-in-law William and his great-grandchildren. Jim loved spending time with family and friends and was an active member of his church community (most recently St. Joseph the Worker Catholic Church in Maple Grove, MN). Jim’s flair for conversation and storytelling will be greatly missed but we know he is having grand reunions up in heaven.

To order memorial trees or send flowers to the family in memory of James Moulsoff, please visit our flower store.