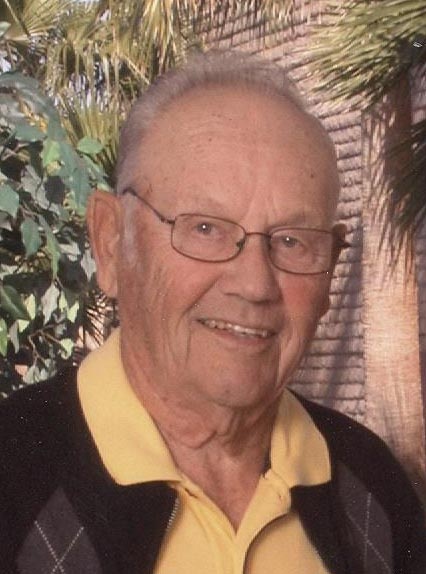 James Loren Putnam, 92, of Tintah, MN, passed away at St. Catherine's Living Center in Wahpeton, ND, on December 31, 2014. The funeral will be 2:00 PM, at St. Gall's Catholic Church in Tintah, on Saturday, January 3, 2015, with a visitation from 1:00 to 2:00 PM prior to the funeral at the church. The interment will be at Riverside Cemetery in Nashua, MN.
James was born in Breckenridge, MN, on November 10, 1922, one of three children to Charles and Ethel (Govig) Putnam. He grew up and attended school near Tintah, graduating from Tintah High School in 1940. Following high school, he attended NDSU for two years. In 1944, Jim joined the US Navy, serving his country in World War II. He was stationed on The USS Appalachian ship as a Yard Net Tender. Upon is honorable discharge from the Navy, Jim came back home and married the love of his life, Betty Fortune, on December 28, 1946, in Wheaton, MN. They made their home on the family farm near Tintah, and for a short while, farmed with his dad. The Putnam farm proudly stands as one of the century farms in Minnesota. Jim was also a rural mail carrier for 27 years and retired in January of 1983.
Jim was active in the Masons and the NRA. He was an excellent marksman. He participated in many rifle tournaments over the years and won the Aggregate award 7 times. He was a life-long member of the Tintah Congregational Church. He was a member of a Gospel Quartet, the Congregational Church Choir, and played Taps on his coronet for Veteran's Memorial Services. He stayed active playing tennis and softball, continuing both sports until late in life and playing his last tennis match at age 89. Jim maintained a beautiful garden, loved to hunt and fish, and enjoyed dancing. Jim and Betty were snowbirds, spending 27 winters in Mesa, AZ.
Jim is survived by his wife of 68 years, Betty; his children, Nancy (Larry) Krenz, of Wheaton, MN, Linda Albert of Tintah, James Warren (Jeanne) Putnam of Tintah; 14 grandchildren, Jason Krenz, Ryan Krenz, Allison Frisch, Keri Schmitz, Stephanie Tillmann, Paul Krenz, Amy Albert, Megan Pearson, Josh Albert, Jacinta Putnam, Jessica Lyngaas, Jeni Vipond, JoAnna Putnam, James B.C. Putnam; and 18 great-grandchildren.
He was preceded in death by his parents, Charles and Ethel; Myrtle Putnam; his two sisters, Doris Davison and Joyce Husen; and his grandson-in-law, Lance Lyngaas.
To order memorial trees or send flowers to the family in memory of James Putnam, please visit our flower store.