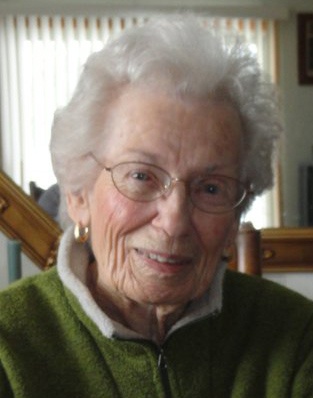 Jean Dolores Hertzenberg, age 92, of Twin Town Villas Assisted Living Community, Breckenridge, MN, died on March 6, 2014, at St. Francis Healthcare Campus. Visitation will be from 5:00-7:00 pm, at Joseph Vertin & Sons Funeral Home in Breckenridge, on Monday, March 10, 2014. The funeral service will be at 11:00 am, on Tuesday, March 11, 2014, at Breckenridge Lutheran Church, with Pastor Mark Manning officiating. The interment is at Riverside Cemetery in Breckenridge. The lunch will follow, at the church. Memorials preferred to your favorite local charity.
Born to Arthur and Clara (Torgeson) Sorenson, on March 11, 1921, in Minneapolis, Minnesota, Jean was confirmed at Salem Lutheran Church and graduated from West High School. She worked in the actuarial department of Northwestern Life Insurance Company while taking classes at the University of Minnesota.
She married Bob Hertzenberg on November 15, 1941 at Salem Lutheran Church. Bob served in the Navy from March 1942, until October 1945, during which time they moved to Kalamazoo, Michigan, where he was stationed. Once he deployed overseas, Jean moved to Omaha, Nebraska to live with her parents during the remainder of the war. She and Bob returned to Minneapolis after the war for 1 1/2 years prior to moving to New Richmond, Wisconsin. They made New Richmond their home from 1946-1964, raising a daughter and three sons. They moved to Breckenridge, Minnesota in 1964, when Bob accepted the position as President of The First National Bank.
Jean forged life-long friendships by becoming an active participant in community. She was involved in Boy Scouts and Girl Scouts when her children were young. She belonged to Breckenridge Lutheran Church and was active in her Church Circle. She enjoyed the Breckenridge Women's Study Club and Chapter B PEO. She was an avid reader; enjoyed cross-word puzzles, gardening, entertaining and she loved playing bridge with her many friends.
She and Bob were married 67 years. They enjoyed the traveling they were able to do after Bob's retirement. Spending time with family was a top priority and they loved visiting with their children, grandchildren and great-grandchildren. Jean was a wonderful wife and mother, and a great friend. Her intelligence, wisdom, loving nature, and humor will be greatly missed. She especially appreciated the help, kindness, and the closeness of friends in her later years.
Jean is survived by her daughter, Ann (Bob) McGray, Breckenridge, MN; sons, Rob Hertzenberg, Houston, TX, Rick (Joey) Hertzenberg, Olathe, KS, and Jerry (Diana) Hertzenberg, Kingwood, TX; grandchildren, Megan McGray (fiancé Steve Saunders), Cayuga, ND, Casey (Amanda) Hertzenberg, Overland Park, KS, Lindsay (Chris) Blanchard, Olathe, KS, Kip (Sarah) Hertzenberg, Broomfield, CO, Lauren (Marcos) Alonso, London, England, Kristen (Dana) Satterwhite, Las Vegas, NV, Kirk (Cassie) Hertzenberg, Conroe, TX, Bill (Fabiola) Hertzenberg, Spring, TX, and Kara (Craig) Pettit, Waterloo, IA; great-grandchildren, Cullen, Aidan and Evan Blanchard, Charlie, Josh, and Jack Hertzenberg, Shea Satterwhite, Brooke and Hannah Hertzenberg, Alex, Stephanie, and Amber Pettit, Michael, Dani, and Sabrina (Randy Wells) Relaz, great-great-grandchildren, Silas and Lily Wells, and many other relatives and friends.
She was preceded in death by her parents, Arthur and Clara Sorenson; husband, Bob Hertzenberg; and brother, Jerry (Bonnie) Sorenson.
To order memorial trees or send flowers to the family in memory of Jean Hertzenberg, please visit our flower store.