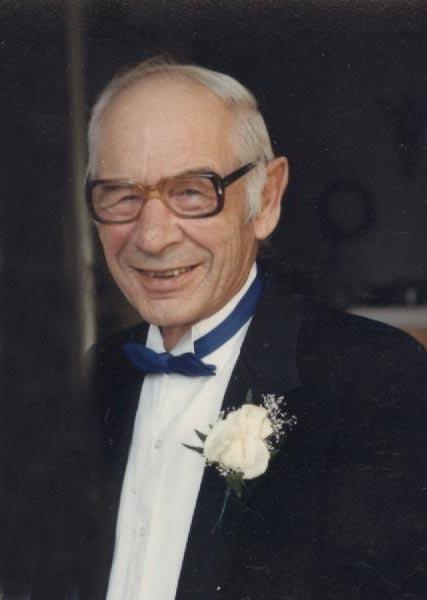 Jerome John Heitkamp, 95 of Wahpeton, ND died April 15, 2013 at St. Francis Nursing Home in Breckenridge, MN. The Mass of Christian Burial will be Saturday April 20 at 11:00AM at St. Peter and Paul Catholic Church in Mantador, ND. The visitation will be at Joseph Vertin & Sons Funeral Home in Breckenridge, Friday, April 17 from 5:00 to 8:00PM with a prayer service at 7:00, and again one hour prior to the funeral at the church. Father Dale Lagodinski will be the celebrant. The interment will be at St. Peter and Paul Catholic Cemetery in Mantador at a later date.
Jerome was born May 22, 1917 to Francis and Magdalena (Becker) Heitkamp in Barney Township, Mooreton, ND. He attended country school near Mooreton, after which he worked on the family farm. He married the love of his life, Joan Pellman on June 17, 1941 in Mantador. They made their home on the original Heitkamp homestead, where together they nurtured twelve children, cultivated crops and raised livestock. Jerome lived on the family farm until he entered the Leach Home in Wahpeton, ND in 2008.
Jerome was an active member of St. Peter and Paul Catholic Church. He was a 3rd degree Knight of Columbus and a member of the Catholic Order of Foresters. He also served on the Barney Township Board and took great pride in the maintenance of the township roads.
Jerome's interests included fishing, gardening, and woodworking. He will be remembered for his strong faith in God which molded his character as a hardworking man with solid work ethic. He placed a high value on family and time spent with them.
Jerome is survived by his wife Joan of 72 years; his eleven children, Kathleen (Terry) King of Rochester, MN, Margaret (Jack) Hutchinson of Austin, TX, Linda Heitkamp of Albuquerque, NM, Juanita Nankervis of Wahpeton, ND, Grace Thompson Heitkamp of Lonsdale, MN, Donald (Cathy) Heitkamp of Mooreton, ND, Larry Heitkamp of Sebeka, MN, Mary (Bernie) German of Toronto, Canada, Jerry Heitkamp of Richville, MN Richard Heitkamp of Wahpeton, ND and Rosalie (Paul) Althoff of Cannon Falls, MN; his 20 grandchildren, Greg (Sheila), Matt (Tresa), Ben, Mary Kay (Micah) Michael (Erin), Cole (Serena), Emily (Joel), Simon, Evan, Melaine, Kelsie, Christian, Bay (Reet), Katie (Andrew), Carl, Brayden, Ashley, Abbie, Elizabeth, Ian; 12 great-grandchildren, Kyle, Alex, Jackson, Max, Susan, Regina (Josh), Nathan (Renae), Christina, Elliot, Ansel, Corbin, Elias; 2 great-great grandchildren Ashton and Nova; his sister Dorothy Pederson of Wahpeton, ND; and his brother James Heitkamp of Wyndmere, ND.
Jerome is preceded in death by his parents; his daughter Nancy (1950); two brothers, Charles Heitkamp and Bernard Heitkamp; his sister Viola Tompt; and several sisters-in-law and brothers-in-law.
To order memorial trees or send flowers to the family in memory of Jerome Heitkamp, please visit our flower store.