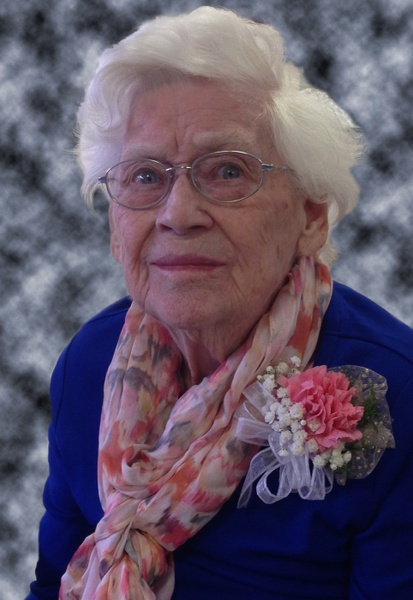 Joan Irene Heitkamp, 98, of Wahpeton, ND, passed away surrounded by her loving family on Wednesday, January 31, 2018, at St. Catherine’s Living Center in Wahpeton. Public visitation will be Saturday, February 3, 2018, at 9:30 AM at Sts. Peter and Paul’s Catholic Church in Mantador, ND, followed immediately by the Funeral Mass at 11:00 AM. The funeral arrangements have been entrusted to Joseph Vertin and Sons Funeral Home in Breckenridge, MN.

Joan was born on December 19, 1919, on the family farm in Barney Township, ND to John and Rose (Klosterman) Pellman. She grew up and attended school in Mantador, ND. As a young girl, she was active in 4H, this passion manifested itself in her adult life when she became a community leader for 4H. After her schooling, she worked for a short time until she married the love of her life, Jerome Heitkamp. The two were united in Holy Matrimony on June 17, 1941, in Mantador. The couple then made their home on the original Heitkamp homestead near Mooreton, ND where they lived together for 67 years, sharing memories and raising 12 children.  Although Joan took pride in tending to the family farm and livestock, her enthusiastic love of flowers and gardening brought her much joy; she was particularly known for her large vegetable garden which produced a bountiful harvest that she canned and preserved every year.

Joan had many other life passions as well. She was a devoted member of her community and to the Catholic Order of Foresters and Christian Mother’s Group. She was a catechism teacher at St. Peter and Paul’s Catholic Church for many years and later served as their principal. She enjoyed square dancing and passed her love of sewing, quilting, and handcrafts along to her daughters. Joan and Jerome were ardent travelers who enjoyed trips to the Holy Land, Rome, Germany, Mexico, Spain, Hawaii, and all over the continental states where they visited family; she and Jerome loved spending time with family.  Some of her grandchildren’s favorite memories were helping to categorize and sort through her stamp collection, picking out the brightest and most colorful stamps from all over the world. Joan loved historical and family genealogy and used her talents in this area as a compiler at the Richland County Historical Society.

Joan’s life was filled with joy as her own children blessed them with grandchildren who absolutely adored her. On April 13, 2013, God called Jerome home to Heaven. Joan moved to the Leach Home in Wahpeton for a short time and then later, to St. Catherine’s Living Center.

Joan is preceded in death by her parents; her daughter, Nancy; her son, Jerry Heitkamp; her brother, Charles; and her sisters, Patricia, Florence, and Catherine.

To order memorial trees or send flowers to the family in memory of Joan Heitkamp, please visit our flower store.