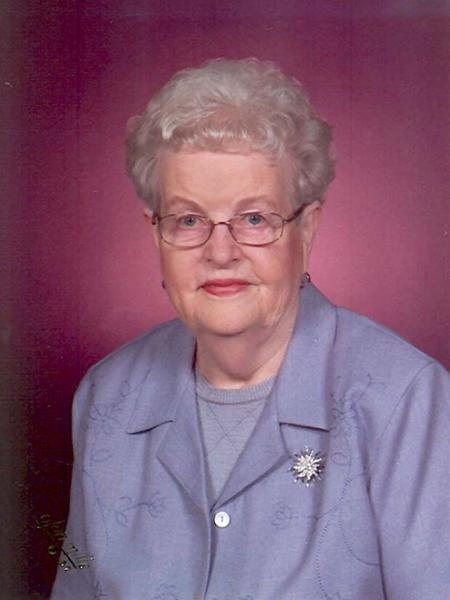 Joan Marie Jacobs of Breckenridge, MN passed away on April 30, 2011. The visitation is Tuesday, May 3, 2011 from 5-7 pm with a prayer service at 7 pm at Joseph Vertin & Sons Funeral Home. The funeral is Wednesday, May 4, 2011 at 11 am at Breckenridge Lutheran Church. Officiating is Pastor Mark Manning. The interment is at Fairview Memorial Gardens, Wahpeton, ND.
Joan was born on November 19, 1932 to Ernst and Anna (Laugen) Johnson in Fergus Falls, MN. She grew up and attended school in Fergus Falls and graduated from Underwood, MN. After graduation, Joan worked at the Globe Gazette in Wahpeton, ND. On November 12, 1950 Joan was united in marriage to Russel Jacobs at Augustus Lutheran Church in Fergus Falls. They made their home in rural Breckenridge (Nilsen Township). She worked at Sagness Variety Store and St. Francis Nursing Home, retiring in 1995.
Joan will be remembered for her kindness and infinite patience. She had a true servanta�(TM)s heart. It was a privilege for her to serve her church family as a volunteer and a member of the church circle. She took much pleasure in quilting and sewing. Her work was a direct reflection of her love for those who received them. Over the years, she had sewn quilts for her children, grandchildren and for many people through her work at the church.
Family was a central part of Joana�(TM)s life. Her fortitude and thoughtfulness were experienced by them daily. She was also known as the a�~family historian.a�(TM) She enjoyed passing on traditions such as the art of making lefsa. She treasured her time spent with family.
Joan is survived by her husband Russel Jacobs of Breckenridge, MN; her son Roger (Deb) Jacobs of Breckenridge, MN; her son-in-law Jeff Moellenkamp of Fort Ransom, ND; her four grandsons and five great-grandchildren: Shane (Neffie) Jacobs and their children Sebastian and Aydan; Justin (Becky) Jacobs and their children Kaylin and Alyssa; Cory (Annie) Jacobs and their daughter Ava; and Brett Jacobs; and her sister Leona (Claremont) Lien of Fargo, ND.
Joan is preceded by her daughter Barbara Moellenkamp; her parents Ernst "Edwin"and Anna (Laugen) Johnson; and her brother (in infancy).
To order memorial trees or send flowers to the family in memory of Joan Jacobs, please visit our flower store.