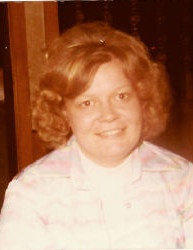 Joan was born on February 1, 1950, to Earl and Ruth (Veflin) Babst of Breckenridge. She grew up in Breckenridge. She attended grade school at Breckenridge Elementary School and high school at Breckenridge High School, graduating in 1968. She worked at St. Francis Nursing Home as a candy striper and at the St. Frances Hospital. Joan married Paul Vertin and they had three children, Chad, Troy, and Kyle. Paul and Joan made their home in Willmar and then moved to Breckenridge where they continued their life. Joan was a member of Breckenridge Lutheran Church. Paul and Joan owned Vertin’s V-mart Furniture Store and Joan started working there as a bookkeeper in 1980. Joan was a cub scout den mother, hockey mom/grandma, and in a bowling league, winning three championship trophies in a row. Joan collected Emmett Kelly Clowns and she also loved to travel and spend time with her family.

Joan enjoyed camping, especially at Itasca. Long Lake by Fergus Falls, MN, was her family’s favorite pastime. They had a lake place at Wee Villa Resort where many friends and family members gathered.

Visitation will be held from 5 pm to 7 pm, Thursday, August 11, 2022, at Joseph Vertin and Sons Funeral Home, Breckenridge, with her Prayer Service starting at 7 pm. Visitation will continue from 10 am to 11 am, Friday, August 12, 2022, followed by her memorial service at 11 am, at Breckenridge Lutheran Church, Breckenridge. Rene Hasbargen will be officiating the service. Burial will be immediately following the memorial service, held in Riverside Cemetery, Breckenridge. The family wishes to thank the family and friends who showed loving devotion to Joan during her illness these past two years. Arrangements have been entrusted to Joseph Vertin and Sons Funeral Home.

To order memorial trees or send flowers to the family in memory of Joan Vertin, please visit our flower store.
Open