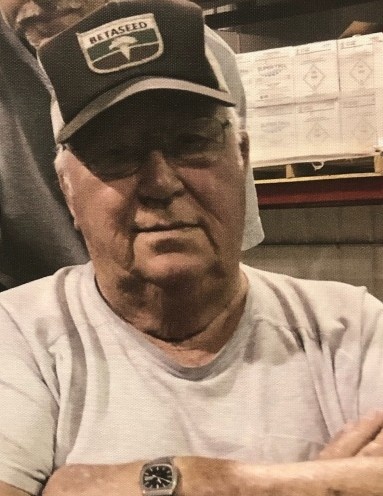 John Duane Ellingson, 77, of Breckenridge, MN, passed away, surrounded by his loving family, on Thursday, April 18, 2019, at Sanford Medical Center, Fargo. Visitation will be from 5:00 p.m. to 7:00 p.m., Tuesday, April 23, 2019, with a prayer service at 7:00 p.m., at Joseph Vertin and Sons Funeral Home, Breckenridge. Visitation will continue from 9:00 a.m. to 10:00 a.m., followed by the funeral service at 10:00 a.m., at Breckenridge Lutheran Church. Pastor Mark Manning will be officiating. Burial will be held at a later date at Riverside Cemetery, Breckenridge.

John was born in Breckenridge, MN, on September 18, 1941, the son of Olaf and Helen (Nord) Ellingson. He grew up there and during his years in high school, worked part-time where he developed his skills in truck maintenance and servicing. After graduating from Breckenridge High School in 1959, John began working on the family farm. He found a passion for farming and spent the rest of his life working alongside his family. In the winter months, he enjoyed racing snowmobiles and continued to stay busy driving truck for various businesses in the area.

On June 3, 1961, John was united in marriage to Jane Stoebe at the United Methodist Church in Breckenridge. They made their home on the family farm and were blessed with four sons.

Farming made up the fabric of John’s life; he was a simple and honest man. When he wasn’t in the field, John enjoyed traveling with his family and spending time at Ottertail Lake. He was an avid outdoorsman and looked forward to pheasant hunting in Kansas, deer hunting in northern Minnesota, and fishing. He loved watching the Vikings, Timberwolves, and NASCAR. He was reliable and as consistent as his 2:30 p.m. coffee breaks. John was a farmer who worked hard, a husband who loved his wife, father who taught discipline and tough love to raise his boys the best he could, and a grandfather who adored his grandchildren.

To order memorial trees or send flowers to the family in memory of John Ellingson, please visit our flower store.