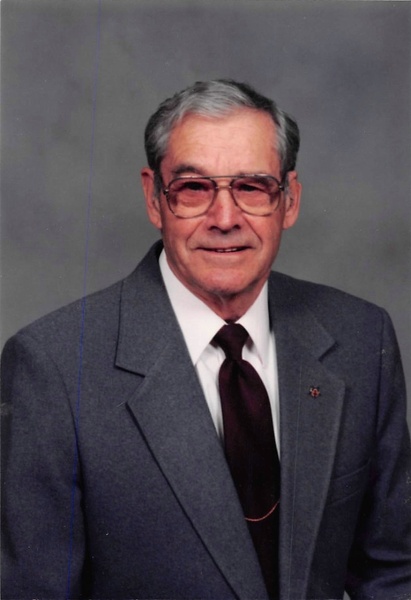 A gentle man, Joseph L. Hulne, passed away on March 24, 2021 in his 102nd year at his home under the care of CHI Health at Home Hospice.  Visitation will be held on Sunday, March 28, 2021 from 4:00 PM to 6:00 PM, with a prayer service at 4:30 PM and a Rosary at 5:00 PM, at St. Thomas Catholic Church in Kent, MN.  Visitation will continue at the church on Monday, March 29, 2021 from 1:00 PM to 2:00 PM, followed by his Mass of Christian Burial at 2:00 PM.  Burial will be at St. Thomas Catholic Cemetery.  A live stream of both services will be available on the funeral home’s website.  Arrangements have been entrusted to Joseph Vertin and Sons Funeral Home, Breckenridge.

Joe was born June 24th, 1919 on a farm near Kent, Minnesota to Belle (Prody) and Alphonse Hulne, in a strawberry patch, according to his Ma.  He joined a sister Elsie, soon to be followed by Margaret and Walter.  The family moved to a farm near Colfax, North Dakota in 1925. It was here, Clarence and Gladys joined the family.

Joe attended a country school across the road from the family farm.  He regretfully remembered, he had to go home for dinner.  He wanted to stay at school and play. He completed 8th grade and began farming with his Pa.  Joe actively farmed until 1982. He was 63.

On November 20th, 1941 Joe was united in marriage to Helen Fleming at St Mary’s Catholic Church in Breckenridge, Minnesota.  They lived near Colfax when they were first married until they purchased their own farm near Wolverton, Minnesota. They lived there for 24 years and raised their family of four, Rick, Midge, John, and Bette-Jo.  In 1966, they moved to a farm along the Red River near Kent. Joe spent many hours fishing on the river.

Joe and Helen purchased a cabin on Ottertail Lake, Minnesota in 1969, where Joe continued to indulge his passion for fishing, and generations of memories were created there.

They bought a home in Breckenridge in 1998 where Joe resided until his death.

Joe was a lifelong member of St. Thomas Catholic Church in Kent. He was active in the Catholic Order of Foresters, the Rod and Gun Club, an active 4-H leader at local and county levels, and a school board member.

Helen and Joe became ”empty nesters” in 1975, and hit the road in 1976.  Joe enjoyed traveling with Helen across the United States.  They especially enjoyed Key West, Florida and spent a winter in Hawaii. Southern Texas eventually became their winter home.

Joe was a hard worker and played just as hard.  During his lifetime, he had many hobbies including,  bowling, woodworking,  dancing, snowmobiling, and gardening.  He planted his last garden when he was 95.  He loved to play cards, especially Bridge and Pinochle. He continued to enjoy playing cards until his death. He last played on March 22, 2021.

He was an avid fisherman.  He always said, “fishing was good, catching a fish was “gravy”.  He kissed the small fish goodbye, and told them to grow up, to the delight of his grandchildren.

Joe was open to new technology from tractors to cell phones.  He got his 1st computer in his 80’s.  He learned to use the GPS in his cars and loved it.  He’d tap the screen when you’d back up and say, “Look here, it sees better than you do!” Joe’s last car was a 2019. He bought it the year he celebrated his 100th birthday.

After Helen passed away, Joe found a companion in Billie Jean.  They enjoyed 15 years together, traveling, playing pinochle, dancing, and spending time together in Minnesota and Texas.

Joe embraced life.  He never said, “could’ve, would’ve, or should’ve”, and his attitude reflected that until his dying day.  Even as his strength failed, he never grumbled or complained.  He enjoyed his last days, as he was able to, until he was called to his forever home, Heaven.

Joe was preceded in death by his wife, Helen, of 62 years; his parents; brothers, Walter and Clarence Hulne; and sisters, Elsie Pedersen, and Margaret Picotte Krook.

Joe will be greatly missed, but what a ride he had.

To order memorial trees or send flowers to the family in memory of Joseph "Joe" Hulne, please visit our flower store.