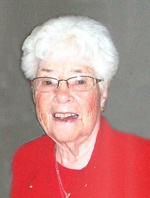 Joyce Marion VanTassel, 90 of Breckenridge, MN died December 31, 2012 at St. Francis Nursing Home, Breckenridge. The visitation is from 5:00 to 8:00PM, Thursday, January 3, 2013 at Joseph Vertin & Sons Funeral Home, Breckenridge and on Friday from 10:00 to 11:00AM prior to the funeral at St. Thomas Church. The funeral is Friday, January 4 at 11:00AM at St. Thomas Catholic Church in Kent, MN with Father Peter Kirchner officiating. The interment is at St. Thomas Cemetery, Kent.
Joyce was born on September 18, 1922 to Arthur and Mabel (Swenson) Ness in rural Wolverton, MN. She grew up and attended school at Wolverton and graduated High School in 1941. After her schooling, she worked for area farmers. Joyce was united in marriage to Lester J. Grenier on July 30, 1942. They farmed and raised their family in Roberts Township, Wilkin County, MN. Lester passed away March 13, 1968. After Lester's untimely death, Joyce attended NDSSS for secretarial studies then obtained employment at the Breckenridge High School. She married Kenneth "Key" VanTassel June 24, 1981 and then moved to Ottertail Lake where they owned and operated Greenwood Resort. They eventually sold the resort and retired, remaining at Ottertail Lake. In 2005, they moved to Breckenridge. Key passed away on October 25, 2012. Joyce became a resident of the St. Francis Nursing Home in the fall of 2012.
Joyce was a member of the Catholic Order of Foresters, Wahpeton Eagles Club, and St. Thomas Catholic Church. She loved to crochet, and, over the years had received blue and grand champion ribbons at the Wilkin County Fair for her entries. She had a green thumb and counted it a joy to have exhibits in the fair for her flower and vegetable gardens. Her yard always looked like the "Peace Gardens." Joyce enjoyed card playing, dancing, fishing and spending time with family and friends. She was a gracious hostess and very special mother and friend.