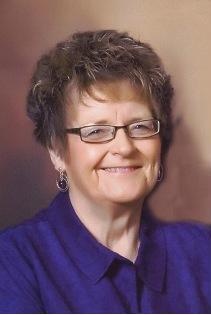 Judith Jeannine Underberg, 70 of Breckenridge, MN, passed away Sunday, June 2, 2013 at Sanford Hospital in Fargo, ND. The Mass of Christian Burial will be at 10:30AM, Friday, June 7, at St. John's Catholic Church in Wahpeton, ND. The visitation will be on Thursday, June 6, from 5:00 to 8:00PM with a prayer service at 7, at Joseph Vertin & Sons Funeral Home in Breckenridge. There will also be a visitation at the church one hour prior to the funeral. Father Dale Lagodinski is officiating.
Judy was born in Breckenridge on May 19, 1943 to Donald and Audrey (Thiel) Hermes. She attended elementary school in Mooreton, ND and was part of the Wahpeton High School graduating class of 1961. She graduated from Joseph's School of Hair Design in Fargo in 1962. Her first job was at Tom's Hairstyling in Nisswa, MN. After a short period she moved to the Wahpeton/Breckenridge area and worked in various salons. In 1970, she opened Judy's Beauty Nook and even though her business changed locations several times over the years, her devotion to her clients and vocation, never wavered. Judy was united in marriage to Jim Halstenson on December 28, 1963 at St. Anthony's Catholic Church in Mooreton. To this union, a son and daughter were born. Jim preceded her in death in 1985. On September 20, 1986, Judy married Mark Underberg and they made their home in rural Breckenridge. Together they did catering, traveling-including the annual family reunion trip to Deadwood, SD, and dancing. Judy appreciated the fine art of cooking and baking but was most gratified when she could entertain and make people feel welcome. She also enjoyed karaoke and playing dominoes. Judy was an active member of St. John's Catholic Church and the VFW Auxiliary in Wahpeton.
Judy is survived by her husband Mark of Breckenridge, MN; her daughter Karla (fiancé Patrick Casey) Halstenson of Breckenridge, MN; her mother Audrey Hermes of Wahpeton, ND; her step-children Jeffrey Underberg of Olympia, WA, Jennifer Rice of Olympia, WA, and Jill(Dave) Wrobel of Medford, OR; 4 step- grandchildren and 2 great-step-grandchildren; 4 brothers, Jeffrey (Barbra) Hermes of Mesa, AZ, Doug (Sharry) Hermes of Barney, ND; Guy (Jan) Hermes of Mesa, AZ, and Dana (Janelle) Hermes of Grand Forks, ND; her 3 sisters Charlotte Hermes of Fargo, ND, Mary Jean Hermes of Seattle, WA; and Carmen (Terry) Marohl of Mooreton, ND; Mark's siblings, Bernie (Jean) of Douglas, WY, Gary (Carol) of Newcastle, WY, Mary Lou (Robert) Thurman of Canon City, CO, and Rose Ann (Richard) Hulne of Wolverton, MN; many nieces and nephews.
Judy is preceded in death by her husband Jim Halstenson; her son Bradley Halstenson (age 7); her step grandson, Kurt Underberg; and her father Donald Hermes.
To order memorial trees or send flowers to the family in memory of Judy Underberg, please visit our flower store.