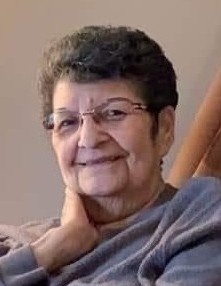 Judy Wolter, 74, of Breckenridge, MN, passed away on Wednesday, April 7, 2021, at her home surrounded by her family.  Visitation will be held on Friday, April 16, 2021, from 5:00 pm to 7:00 pm, followed by a prayer service at 7:00 pm at Vertin-Munson Funeral Home in Wahpeton, ND.  Visitation will continue at the funeral home on Saturday, April 17, 2021, from 9:00 am to 10:00 am, followed by her funeral service at 10:00 am.  A livestream of both services will be available on the funeral home’s website.  Arrangements have been entrusted to Joseph Vertin and Sons Funeral Home, Breckenridge.

Judy Arlene Desjarlais was born the oldest of nine children on April 15, 1946, to Gabriel and Violet (St. Claire) Desjarlais in Belcourt, ND.  Her family moved to Dunseith, ND. Judy was sent to Pierre, SD, where she attended school through second grade and then attended Circle of Nations School, Wahpeton, until the 8th grade.  Following that, she attended school in Springfield, SD, Rugby, ND, and Flandreau, SD, before earning her GED at NDSCS in Wahpeton.  After her schooling, she resided in Dunseith for a short time before relocating to South Dakota where she was married, from that union she was blessed with two children, Terri Lynn and Jacquelyn. She later moved, to Wahpeton where she helped relatives and other friends in the area with childcare.

On November 20, 1970, Judy was united in marriage to Alfred Wolter in Sisseton, SD.  The couple made their home East of Breckenridge where they raised their family.  Judy worked at numerous jobs in the area including the Scotwood Motel in Breckenridge, the Leach Home in Wahpeton, Elmer’s Bar in Doran, MN, Whitey’s off-sale in Breckenridge, and eventually in maintenance at the Circle of Nations in Wahpeton where she retired from in 2003.

Judy’s home was always open to others and she would welcome anyone who wanted to visit.  She loved family meals, watching tv, embroidering, old-time country music, and dancing.

She was preceded in death by her parents; two brothers, Robert and Gabriel Desjarlais; and a sister, Loretta Desjarlais.

To order memorial trees or send flowers to the family in memory of Judy Wolter, please visit our flower store.