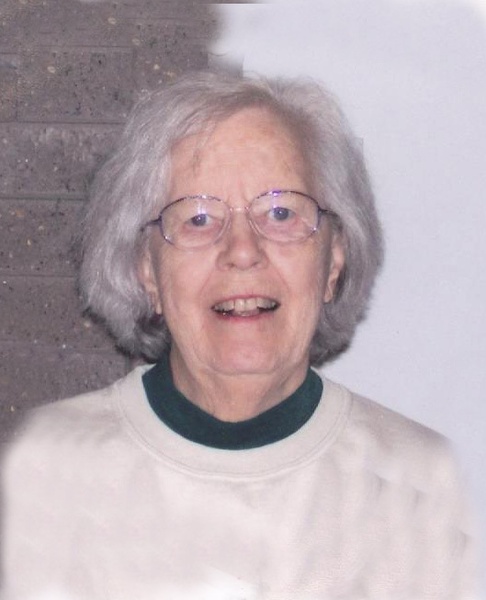 June Clarice Larson, 85, passed away on Saturday, July 25, 2015, at St. Francis Nursing Home, Breckenridge, MN. There will be a visitation from 5-8 p.m. on Tuesday, July 28, at Joseph Vertin & Sons Funeral Home in Breckenridge. The funeral will be at 11:00 a.m., on Wednesday, July 29, at the United Methodist Church in Breckenridge. The interment will be at Riverside Cemetery, rural Campbell.
June was born to Otto and Ellen (Conrad) Trovatten on June 2, 1930, in Margo, Saskatchewan, Canada. She lived there with her parents and three sisters for several years until they moved to the United States, settling in the Campbell area. Following graduation from Campbell High School in 1948, June attended North Dakota State School of Science in Wahpeton, ND, and it was there that she met her future husband. June was united in marriage to Judson Larson, on November 3, 1950, in Campbell. They settled in rural Campbell where they became lifelong partners in running the family farm. June and Jud considered the Northwest Angle on the Lake of the Woods, MN, their second home. What started out as a shared interest in a log cabin on Magnussen Island, Lake of the Woods, eventually led to building a year-round second home at the Northwest Angle, where they and their family enjoyed so many wonderful happy memories for over 40 years.
During her life, June involved herself in in many organizations and activities. She was a member of the Eastern Star for many years, and also enjoyed Bridge Club, Birthday Club, bowling, swimnastics, cross-country skiing, and the Fat Ladies Club. She was always willing to lend a hand with the Ladies Aide at the Congregational Church in Campbell. Early in life, she took voice and piano lessons. June loved to read, and recounted that when she was a child, she could hardly wait to learn how to read so that she could enjoy books on her own. She was an accomplished seamstress along with several other forms of needlecraft. She loved to attend auction sales long before it was chic to do so, and became interested in antiques and collectibles; a love she passed on to all of her children.
June's family knew her to be an excellent cook and a master at organizing her family of six. Unlike many in her generation, she had acquired computer skills-setting up her first PC to keep in touch with her many friends and relatives. For a few years, she and her youngest son, Dennis, were in the business of breeding and raising Beagles.
June is survived by her four children, Douglas, of Campbell, MN, Ellen (Timothy) Stowell, of Chattanooga, TN, Steven, of Campbell, MN, and Dennis (Kelli) of Breckenridge, MN; her nine grandchildren, James, Julie, Joshua , Jon, and Rebecca Larson, Tian, Jie Jun, Star, and Yu Hsuan Stowell; two great-grandchildren, Pura and Sebastian; her sister, Janis Schaap, Perham, MN; and numerous nephews and nieces for whom she had special affection. June was preceded in death by her parents, Otto and Ellen; her husband, Jud (January 28, 1999); her two sisters, Doris Rossow Janecky and Lorraine "Sis" Culp.
The family wishes to express their appreciation to those affiliated with St. Francis Nursing Home for the excellent care and love they gave their mother during her last two years of life. As they shared her last days of life they were able to witness how much she meant to many people. They are also thankful for Hospice's role in making her last days so very comfortable and dignified. It was a comfort to have their resources and reassurance during this very difficult time.
The family requests that if people prefer to contribute money in lieu of flowers, please send their contributions to organizations that find a cure for Parkinson's. The National Parkinson Foundation (1.800.4PD.INFO; http://m.parkinson.org) is one such organization.

June C. Larson
To order memorial trees or send flowers to the family in memory of June Larson, please visit our flower store.