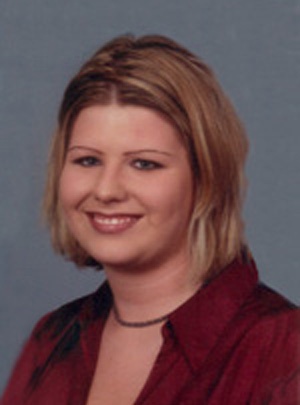 Kari Jo was born January 25, 1981 at in during the Super Bowl. She graduated from in 1999 and attended the of in for three years studying retail purchasing.

On February 4, 2003 she was married to Patrick Damon Matthews at “The Little White Wedding Chapel” in . She gave birth to McKensie Rae in 2003 and Patrick Damon Jr. in 2004.

Kari worked at the Dairy Queen in Breckenridge during her high school years, and later at Lane Bryant at the Mall of America, Mystic Lake Casino and Hotel and Jackpot Junction. She was currently employed with Quantrix Valuation in .

The most wonderful thing in the world to Kari was her two children. She was a wonderful mother. Family and friends enjoyed her talented artistic side that consisted of drawing, painting, pottery, sewing and baking. She also loved to scrapbook, read and do word puzzles.

She was preceded in death by: Her great-grandparents: Olive and George Jankowski; Her paternal grandparents: Alex and Viola Anderson; and Her uncle: Randy Bratlie

To order memorial trees or send flowers to the family in memory of Kari Matthews, please visit our flower store.