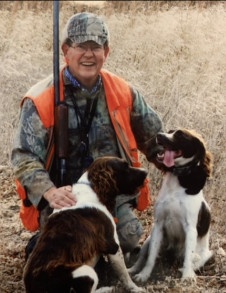 Kenneth Glen Wik, age 66, of Fairmount, ND, passed away unexpectedly at Sanford Medical Center, Fargo, ND, surrounded by his loving family, on Thursday, May 19, 2022. Visitation will be held from 5 PM to 7 PM, Wednesday, May 25, 2022, followed by a prayer service at 7 PM at Vertin-Munson Funeral Home in Wahpeton, ND. Mike McCarlson will be officiating. The funeral service will be held at 10:30 AM, Thursday, May 26, 2022, at Tabor Lutheran Church, 620 E US Hwy 12, Webster, SD 57274. Burial will be held in Tabor Lutheran Church Cemetery, Webster. Please copy this link into your browser to view the livestream of the funeral service: https://www.facebook.com/Fiksdal-Funeral-Service-241436452582825

Ken was born in Webster, SD, on April 23, 1956, the youngest of five children born to Ingvald and Dorothy (Rasmussen) Wik. He grew up in rural Webster where he attended a one-room, country school through the 8th grade until he and his family moved into town, and he began attending Webster High School, graduating in 1974. Ken enjoyed participating in wrestling and archery, and he received several awards and accolades throughout his high school career, but was never one to flaunt his achievements; his work spoke for itself. He successfully restored his 1957 antique Chevy and competed in the North Dakota Archery Olympics. Ken also worked at the local grocery store in the meat cutting department throughout high school. He learned on the job at Spies and his interest in this field led him to pursue specialized training for a butchers certificate, which would accelerate his career for decades to come.

One evening while roller-skating at Skateland in Fargo, ND, Ken met Denise Schaubert. The two fell in love and on August 10, 1985, were united in marriage at First Lutheran Church in Fargo, ND, surrounded by family and friends. They made their home in Wahpeton, ND, before moving to their forever-home in Fairmount and were blessed with their beautiful daughter, Becky. Ken was an exceptional father and husband; his family was his anchor, and he was their rock.

Ken had a heart for others, and he selflessly poured kindness into everyone around him. This filtered into each community and store he worked for including the Spies grocery store in Watertown where he learned the trade on the job. He then was sent to Spies in Rosholt, SD,  and finally, Spies in Breckenridge. While the development of the new Econo Foods grocery store was underway, he was hired as the meat manager. With a servant’s heart and leadership, Ken was an incredible resource, even helping in the construction of the Econo Foods store. He was a trusted member of the team for 37 years and never missed a day of work; retiring hadn’t even crossed his mind.

Ken found great joy and a sense of peace while restoring outbuildings and barns on his family’s property in South Dakota and ultimately pledged the land to the Game and Fish department to be enjoyed by others for years to come. Hunting was one of his favorite hobbies, and he entrusted his daughter to exclusively train his hunting dogs who accompanied him and his brothers on many pheasant hunting trips. Ken and Denise were always curating lasting memories together with their daughter. They loved horseback riding, 4-H state championships trips where Becky demonstrated her dog showmanship skills, trap shooting dates when Becky was home from college, and countless rides in the Pontiac listening to country music and snacking on blueberry cake donuts. He built a beautiful legacy of servitude, compassion, and dedication in every endeavor.

Arrangements have been entrusted to Joseph Vertin and Sons Funeral Home.

To order memorial trees or send flowers to the family in memory of Kenneth "Ken" Wik, please visit our flower store.