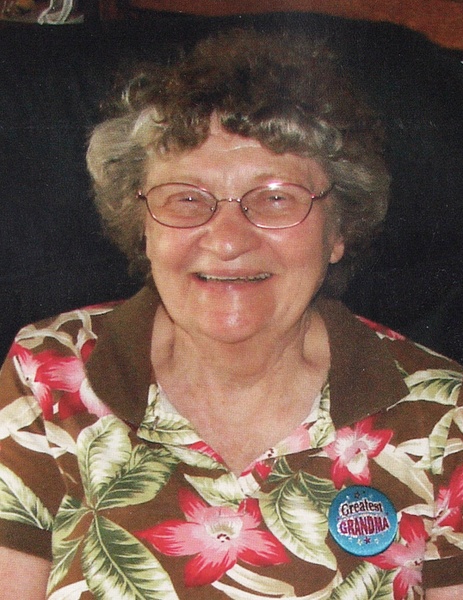 Lauretta L. Thoennes, age 87, of rural Doran, MN, died today 11-10-2016 at St. Francis Medical Center, Breckenridge, MN. Her funeral will be at 1:00pm, Monday, November 14, at Joseph Vertin & Sons Funeral Home in Breckenridge, MN, with a 1hr. visitation prior to the service. She will have a visitation from 3:00 – 7:00 pm, with a Prayer Service at 4:00 pm, on Sunday November 13, at Joseph Vertin and Sons Funeral Home. Father Parks will be the Celebrant. The interment will be Monday at 3:15 pm, at Oak Grove Cemetery in Fergus Falls, MN.
Lauretta Louise Schott, was born in Rural Doran, MN, on the Fourth of July in 1929, one of three children born to Edward and Zella (Wheeler) Schott. She graduated from Campbell High School in 1947 and was married that same year to Jerome "Jerry" Thoennes, on September 25, 1947. The couple resided in Morris, MN for two years, and then moved to rural Campbell, MN where they made their home for the next 60+ years. Jerry passed away on July 10, 2005 and Lauretta continued to live on the farm.
Lauretta and Jerry were blessed with eight children. Her calling in life was to be a wife and mother and she managed those rolls with compassion, love, and authority. She was the matriarch of her family in every sense of the word. Her and Jerry worked side by side to keep the farm going and raised their children to be contributors as well. She was an amazing cook, specializing in homemade pancakes and welcoming family and friends with mouth-watering spreads. Her green thumb was matchless. There was always a bountiful harvest of vegetables and a beautiful array of color in her flower gardens.
Never one to sit idle, Lauretta was a skilled crafter, mastering sewing and knitting, as well as designing with the scroll saw. She loved to zip around on her riding lawn mower, and in her later years, she passed the time with jigsaw puzzles and word searches. Of all that she loved to do, her crowning glory was her family. Lauretta L. Thoennes went home to be with her Lord on November 10, 2016.
Lauretta will be missed by her seven children, Ray (Linda) Thoennes of Wahpeton, ND, Richard (Susan) Thoennes of Sandstone, MN, Linda (Bruce) Helkenn of Montevideo, MN, Karen Milbrandt of Wahpeton, ND, Dave Thoennes of Breckenridge, John (Amanda) Thoennes of Campbell, MN and Laurie (Tom) Roberts of Sioux Falls, MN; 14 grandchildren; 15 great-grandchildren and 2 great-great-grandchildren; two sisters-in-law, Luella Dunham and Joan Thoennes; and several nieces and nephews. She is preceded in death by her parents, Edward and Zella; her husband, Jerry; her son, Daniel Thoennes; her grandson, Ryan Thoennes; and her brothers, Leonard (Gladyce) and Terry (Rose).